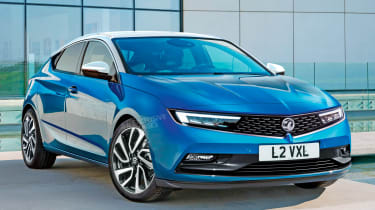 Vauxhall’s resurgence under the new ownership of the PSA Group is continuing apace, with a major reinventions of the Astra hatchback due in showrooms in the next 24 months.

The new Astra will arrive in 2021, and while the car will share much with other PSA-brand hatchbacks, Vauxhall boss Stephen Norman exclusively revealed to Auto Express that it will be “something much more than just a Vauxhall version of the Peugeot 308”.

Auto Express understands that the Astra will eschew the current trend towards taller crossovers and be more of a coupé-style hatchback, as our exclusive images show. The new Vauxhall family face, previewed by the GT X Experimental concept from last year’s Paris Motor Show and made real in the new Corsa, will feature, along with its crisp, blade-like LED front lights. 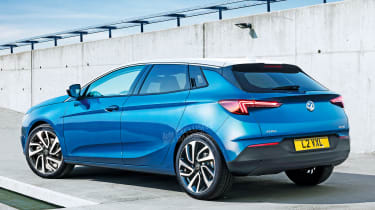 The sloping back end could include door handles hidden in the C-pillars to accentuate the Astra’s coupé-like shape, although clever use of angles will ensure there’s still plenty of headroom in the back, as well as boot capacity to rival the latest Golf’s 380-litre luggage space. Vauxhall will also be looking to take on the Golf inside, with a choice of large central infotainment screens, digital displays in front of the driver – using the 3D tech that appeared first in the new Peugeot 208 – plus an even greater use of soft-touch plastics for a plusher feel.

Expect everything from wireless phone charging to wireless connectivity to bring the Astra’s multimedia systems bang up to date, while Level Two autonomy featuring adaptive cruise control and lane-keeping assistance will also be available.

Under the bonnet, the old GM engine range makes way for PSA motors in petrol and diesel form, with Norman expecting a comeback for diesel power in the coming years. Both 109 and 128bhp versions of the award-winning three-cylinder petrol engine should be available in the Astra, along with the 128bhp 1.5-litre BlueHDi diesel that is expected to produce emissions below the crucial EU target of 95g/km. Six-speed manual and eight-speed automatic gearboxes will also be offered.

Just as in the Vauxhall Grandland X, a 296bhp plug-in hybrid system will be made available on the Astra, but in a sportier variant wearing a VXR badge. Vauxhall has already said that future VXR models will be electrified, with the Corsa and Vivaro van first up for a hot makeover.

But the Astra Hybrid4 VXR, featuring a 196bhp 1.6-litre turbo four-cylinder petrol engine, plus electric motors on the front and rear axles, is expected to go on sale shortly after the new Astra’s launch in 2021. Expect a 0-62mph time of around six seconds, with an all-electric range of more than 30 miles.

It’s still possible that an even higher-performance plug-in model could make it into the Astra range: Peugeot showed the 400bhp 508 Sport Engineered concept at this year’s Geneva Motor Show, which will make it into production.

What will the new Vauxhall Astra have to beat? This is our list of the best hatchbacks currently on sale... 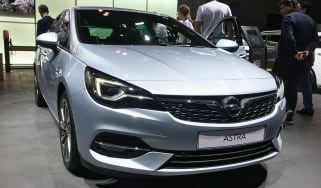 Pricing information for the revamped Vauxhall Astra range has been announced, with prices starting from £18,885 for the hatchback variant