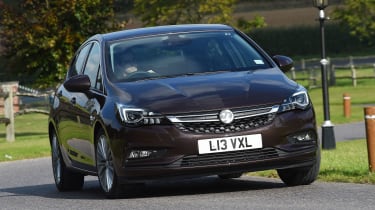 The new Astra is a seriously worthy front runner for the family hatchback class, and is a real shining star in Vauxhall’s otherwise rather staid image. It looks great, drives better than ever and the cabin execution is top notch. It drops a star with this engine due to its so-so efficiency compared to rivals, but if you don’t want a diesel it’s still a good choice.

It’s been a while since a new Vauxhall has come along and disrupted the class order, but it seems the new, seventh-generation Vauxhall Astra has done just that. It’s impressed us as an overall package in both diesel and 1.0 turbo petrol form, but how does the mid-range 148bhp 1.4-litre turbo stack up? Like most manufacturers, Vauxhall  considers the 1.6 CDTi diesel to be the biggest seller in the UK even in lightof current events. But there are plenty of people with an aversion to oil-burners, hence why the Luton firm is offering as many petrols as diesels in the range.  The 1.4-litre unit is available in 123bhp or 148bhp forms, with the latter both faster and more efficient than any non-VXR petrol offered in the previous Astra.

• Best hatchbacks to buy now  That’s a big achievement, and it’s mostly thanks to nearly 200kg being shaved off the kerbweight of this new platform. Banishing the image of the rather lardy previous model, it actually manages to be smaller in external size yet offer more interior space. 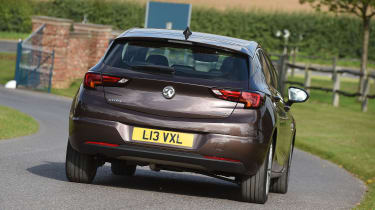 The 1.4-litre turbo is as refined as you’d expect from a four-cylinder petrol, and pulls strongly from low down in the rev range thanks to a decent 235Nm of torque and less weight to pull. It’s more about relaxed mid-range progress rather than high-rev action, as the unit sounds a bit strained past 5,000rpm and doesn’t reward with much extra shove. The VW-Group’s 1.4 TSI feels a bit more willing to rev and Ford’s 1.5T Ecoboost sounds more characterful, but the latter can’t match the Vauxhall for smoothness. The extra power also suits the Astra’s newfound enthusiasm for corners. The ride and handling balance is as good as you’ll find anywhere else in the class, with strong grip levels and a tied-down, planted feel. The steering isn’t brimming with feel and the ride has a slightly firm edge to it, but the same minor points can be levelled at the SEAT Leon. 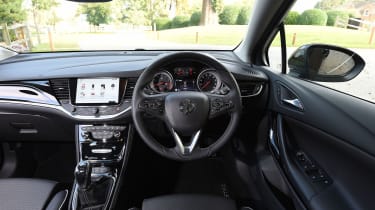 Where the Astra 1.4 T does fall behind a bit is in overall efficiency, despite the improvement over the old car. A combined economy figure of 51.4mpg is perfectly good, but CO2 emissions of 128g/km fall short of the SEAT Leon 1.4 TSI  – the Leon is as much as 18g/km cleaner when fitted with cylinder deactivation tech.   Elsewhere it’s business as usual, which means sharp looks, a classy-feeling and spacious cabin and strong kit levels. It’s way ahead of the Ford Focus in terms of fit and finish, and the superb 8.0-inch touchscreen is amongst the slickest we’ve come across under £30k.  Our Elite Nav spec model comes in at a reasonable £20,315, with standard kit such as satnav with Apple CarPlay connectivity, heated front and rear leather seats, and Vauxhall’s OnStar concierge system with 4G Wi-Fi hotspot.