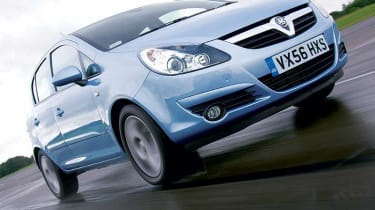 There’s no doubt the new Corsa is a great supermini – but there isn’t quite enough flair to make it feel special. It lacks adventurous styling or imaginative details, although the Vauxhall still offers a winning performance. It’s keenly priced, well built and handles with the kind of agility that banishes the old model to the history books. The fiercely contested supermini sector just got even tougher.

We've printed spyshots, driven early prototypes and tried left-hand-drive versions, but only now has Vauxhall's brand new Corsa arrived on British soil - and Auto Express was first to get behind the wheel.

With six engines to choose from at launch, there should be a model to suit all tastes. However, the car we tried was powered by the fuel-sipping 1.3-litre CDTI diesel - which is expected to be a top-selling powerplant in the UK.

The new Corsa gets off to a very impressive start. It's bigger than its predecessor in every direction, and is well proportioned. The three-door model has a deliberately sporty, coupé-like shape, and the five-door we drove looks smart and neat. However, we wish Vauxhall's designers had made more of a statement with the car's appearance. While we like the new nose and headlamps, the Corsa is a little dumpy from the rear, particularly when you compare it with the model with which it shares its underpinnings, the Fiat Grande Punto.

Thankfully, it seems the stylists and engineers have spent a lot more time working on the interior. It's here that a supermini really proves its worth, and Vauxhall has been careful to make the Corsa one of the most practical models in this competitive class.

Opt for the five-door, and you will be able to transport adults in the rear with no complaints, while the boot benefits from a useful false floor with a secure compartment below.

Up front, it's difficult not to be impressed by the solid build quality of the new dashboard. In an attempt to appeal to younger buyers, Vauxhall is keen to point out the new illuminated switches and fashionably styled round air vents it has introduced - although the finished product is still very conservative. Compared to the class-leading Renault Clio, the Vauxhall's cabin seems to lack a little bit of imagination.

Where the old-shape Corsa always fell flat was on the road, so the Luton firm has worked tirelessly to give the newcomer a more entertaining edge. The results are impressive. Buyers of the three-door SXi model get stiffer suspension, but the softer damping of this five-door Club version seems better suited to the Corsa's character.

The breadth of the new Vauxhall's dynamic abilities seems to be limitless. It can cover long motorway journeys in comfort, thanks to its smooth ride, while it also has an appetite for twisty roads. Although the Corsa can't quite match the steering feedback offered by Peugeot's 207, the chassis feels crisp and responsive when cornering, turning in sharply with bags of grip. All this bodes well for the 150mph top-of-the-range VXR hot hatch, which will join the line-up in April next year.

It's clear that driving dynamics were at the very top of the priority list when the Corsa was created. Everything from the driving position to the brakes makes it feel like a car from the class above. The only real letdown is the gearbox, which has a laboured shift that discourages snappy changes.

Much more impressive is the diesel engine; put simply, the 1.3-litre unit is a revelation. Don't be fooled by its small capacity - the motor produces 74bhp, and is vastly superior to the 1.7-litre powerplant found in the old car. The CDTI is refined and smooth-revving, but don't expect sparkling performance - the dash from 0-60mph takes a lengthy 13.6 seconds, while in-gear acceleration also proves to be lacklustre.

However, combined fuel economy of 61.4mpg will be more than enough compensation for most potential buyers. And emissions of 124g/km make the Corsa a green machine, too.

Weighing in at £10,695, our test car is something of a bargain. Keen pricing is crucial in the supermini market, and the maker has committed to offering a broad range of models at knock-down values. Go for a three-door variant, and you will save an extra £600.

Vauxhall's hatch still isn't particularly exciting, but it has evolved beyond all recognition into a thoroughly polished package. Will it match the sales success of its predecessors? Of Corsa...