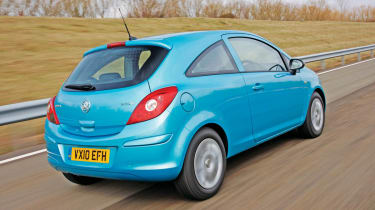 Four years after its launch, the Corsa is still an attractive and desirable car. And this ecoFLEX version offers a welcome green boost, as well as a more capable chassis. Running costs impress, particularly the emissions, but crucially they don’t compromise the driving experience. Vauxhall needs to be very careful how it markets its eco brand, though – with so many variants, buyers can be confused by the figures.

Superheroes never seem to go out of style, and nor do their four-wheeled cousins – just take Vauxhall’s Corsa ecoFlex. Under its Clark Kent exterior lies a fuel-sipping powertrain good enough to ensure it’s been the best-selling model in the firm’s green-badged range.

The latest version went on sale on 1 April, but its running costs are no joke – combined fuel economy is an incredible 76.3mpg, and CO2 emissions of 98g/km are even better.

You need to be careful exactly what you are buying though. There are myriad alternative ecoFlex Corsas (even a 1.0-litre petrol version), and only the 94bhp 1.3-litre CDTI diesel three-door – in S, Energy or Exclusiv trim – hits the magic 98g/km mark, which means exemption from road tax.

Inside and outside, the new economy champ Corsa is identical to the previous car, so it’s an attractive if not particularly inspiring place in which to spend time. But it’s comfortable, spacious and still bang up to date.

Under the skin, a number of revisions to the suspension and steering promise a new level of dynamic ability. While the old Corsa was safe and predictable, it was hardly the finest driving machine – and with stiff competition from the Ford Fiesta ECOnetic, it needed to raise its game.

So the dampers have been revalved, the electronic power-steering has new software to reduce the effort required at low speeds and the suspension has been softened at the front for smoother urban progress.

We weren’t able to fully rate these changes, as our car was an early prototype. But they should give the Corsa a sharper edge and more comfortable ride.

The new engine is a cracker, though, with plenty of low-end torque – so you don’t have to use lots of revs and ruin your fuel economy figures. Town drivers might find it worth waiting until the autumn for the introduction of a stop-start system on the ecoFLEX. In the right conditions, these set-ups can cut consumption by five to 10 per cent – a useful edge in the battle for fuel-sipping superhero honours.

Rival: Fiesta ECOnetic Green-branded Ford features a 90bhp 1.6 turbodiesel engine, and offers similar pace, fuel economy and emissions to the Corsa. It handles and steers brilliantly – although it’s a pricey choice, at £14,962.