With 4.4 million sold across Europe, the Corsa is a huge favourite with drivers. But which is the best buy? 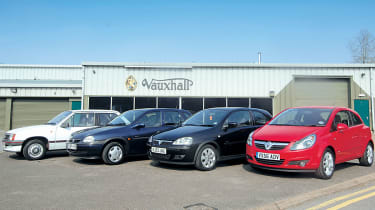 The first of our quartet is the Nova, which was badged as an Opel Corsa in Europe. With economical engines and low insurance, it’s still a popular choice for budget motoring, but good examples are increasingly rare.

It replaced the Chevette, and came in a choice of three and five-door hatchbacks, or two and four-door saloons. The three-door hatch is the most desirable and still commands a premium, but watch out for modifications to hot models like the 1.6-litre GTE and GSI, because they’re popular with boy racers.

Engines available include 1.2, 1.3 and 1.4-litre derivatives of GM’s four-cylinder petrol family, while the 1.0-litre petrol and 1.5 diesel are based on older pushrod powerplants. By modern standards, their performance is merely adequate, but they are economical, easily serviced and reasonably reliable.

Camshafts wear causing catastrophic engine damage, so check that main services have been carried out by a competent mechanic. Brake servo failure on the 1.5-litre diesel will set you back more than £500. However, rust remains the biggest Nova killer, and it usually starts around the rear arches and hatch.

Corsa The Corsa arrived in 1993, but despite the new name it was still based on the Nova platform, so it inherited its predecessor’s uninvolving handling. The range of six engines and various trim levels means most drivers will find a model to suit, although the Corsa is available only in three or five-door bodystyles.

Later cars are most desirable, because the line-up received a facelift in 1997 that took in Lotus-tuned suspension, a restyled front and rear, and new interior trim – plus a series of minor, but significant, changes to the engine range.

These included the addition of a 55bhp three-cylinder chain-driven petrol unit for entry-level Corsas and the Sting special edition. It has nearly as much power and torque as the earlier 1.4-litre models, but handles better and is cheaper to insure than its stablemates. Expect to pay between £1,000-£2,000 at a dealership for a pristine 1.0-litre example.

Corsa (MkII) Longer, roomier and more comfortable than its predecessor, the Corsa MkII is also far more refined, with extra power and economy from its engines. Its fresh platform also increases passenger safety compared with the original version.

Engines include the existing 1.0 and 1.2-litre powerplants, but the 1.4-litre unit was revised, while the 123bhp 1.8 litre is a bigger version of the 1.6 Ecotec engine fitted to the earlier model. Diesel power comes from a Fiat-derived 70bhp 1.3-litre CDTI (post-2003) and the Isuzu-developed 98bhp 1.7-litre DTi Ecotec engine, and they return 62mpg and 57mpg respectively.

The line-up was facelifted in 2003, when the Corsa got a new chrome ‘V’ grille, fresh light clusters and a host of improvements to the engines. These later cars are better looking and more desirable, so run-out versions of the original on 2003 53-plates typically fetch around £500 less than the first revamped models of the same year.

Five-door versions of any age attract a £300 premium over the three-door variant, and automatics also command more: expect anywhere between £100-£500 extra.

New Corsa Bigger and better in every respect, the latest Corsa is a relatively fresh arrival in new car showrooms, so used examples are likely to be ex-demonstrators and pre-registered versions.

The latest model shares the same platform as the Fiat Grande Punto, and is available as either a three or five-door hatchback. It uses the same engines as its predecessor, although the diesels have been upgraded to produce 75bhp (1.3), 90bhp (1.3) and 125bhp (1.7).

The cabin is fresh and appealing, too. Its translucent backlit dials and switchgear are classy, while the general feel and quality of the interior is far superior to the outgoing model’s. There’s more head, shoulder and legroom than ever before and a host of cubbyholes. Features such as the clever Flex-Fix integrated bike rack are sure to be a popular extra, but don’t pay a massive premium for it. There are also five trim levels to choose from.

Prices for the new Corsa start at £7,495, which is cheaper than the new Grande Punto – yet hot versions of the 125bhp 1.7-litre SXi CDTI (which has more torque than the VXR) start at £12,620. For budget-conscious performance drivers, it makes perfect sense.