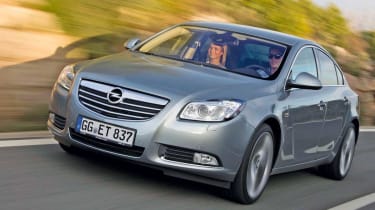 The addition of a second, smaller turbocharger to the Insignia’s diesel has made a huge difference. Throttle response, performance and running costs have all been improved compared to the less powerful 2.0-litre CDTi engine. FlexRide suspension is included in the price – it normally costs £750 – but for almost the same money you could have a BMW 320d.

Vauxhall is expanding the Insignia’s engine line-up with a 192bhp BiTurbo 2.0-litre diesel.
It’s a complicated set-up, but as we discovered in the Opel-badged car we drove, the results are very impressive. At less than 1,500rpm, exhaust gases only pass through the smaller turbo. From 1,500rpm to 3,000rpm, both turbos come into play, and above 3,000rpm, only the bigger turbo is used. The end result is an almost complete lack of turbo lag and a decent performance boost.
The car cuts the 0-62mph time from 9.0 seconds in the standard 158bhp diesel to 8.2 seconds, while top speed increases from 137mph to 143mph. Yet the most significant change comes in everyday driveability.
Maximum torque is 400Nm, and there’s 320Nm available from only 1,250rpm – which translates into instant acceleration at any speed and in almost any gear. In fact, this car’s 50-70mph time is only half a second slower than the high-performance Insignia VXR’s.
BiTurbo models fitted with the manual gearbox come as standard with stop-start, which helps make them cleaner than the standard diesel, too. The twin-turbo emits 129g/km of CO2, compared to the single-turbo’s 134g/km. Economy also improves, going from 55.4mpg to 57.6mpg.
Standard kit on the BiTurbo diesel includes FlexRide adaptive suspension and sport springs that are 10mm lower than the normal set-up. The result is tight handling through corners, combined with a supple ride that sees the car glide serenely over rough and potholed roads.
But prices for the Insignia BiTurbo start at a whopping £27,120, which is £1,825 more than the 158bhp diesel. By comparison, a 181bhp BMW 320d costs £28,080, claims 61.4mpg and 120g/km and is faster, too. That’s what we’d buy.
Share this on TwitterShare this on FacebookEmail