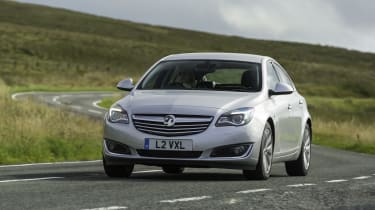 Most Insignias are bought as company cars, and fleet managers will naturally gravitate to the pair of new 99g/km 2.0-litre diesels. But the petrol engine does have a distinct appeal. It adds extra refinement that the diesels can’t match, and has enough power to hustle the Insignia along at a decent pace. This top-spec Elite is generously equipped for the price, so if you don’t cover too many miles, it’s worth a look.

The Vauxhall Insignia is strange to start without hearing the rattle of a diesel, but the 15 per cent of UK buyers who prefer petrol power now have the option of the new direct-injection 1.6-litre turbo from the Cascada. The engine has been added to the Insignia as part of a wide-ranging upgrade.

Instead of the grumble of a diesel, the petrol is very quiet and is a good match for the classier interior ambience of the top-spec Insignia Elite we tested. The numbers are pretty impressive for a car of this size, matching a sub-10-second 0-62mph time with almost 50mpg economy and a 19 per cent company car tax rate.

A power output of 168bhp translates to a sprightly feel on the road, with nice, linear acceleration and a pleasing surge of extra boost as the turbo comes on in the middle of the rev range. The power delivery isn’t dissimilar to a diesel’s in this respect, but the bonus is that the engine remains much quieter, even at high revs.

It’s also smoother than Vauxhall’s previous petrol engines and, thanks to its larger capacity, we’d predict better real-world economy than in the smaller 1.4 petrol turbo or the VW Passat 1.4 TSI. Helping to cut running costs further is an unobtrusive stop-start system. Elite models come with 18-inch alloys as standard.

And while the ride is good on UK roads with the normal suspension, we’d recommend considering the FlexRide adaptive dampers, especially if you go for the 20-inch rims on the options list. The dampers are a £790 extra, but do a great job of controlling the Insignia’s long body, giving good ride comfort, although big wheels can still thump through potholes.

The petrol engine is lighter than the diesels, giving the Insignia’s front end a responsive feel. That’s also helped by the new rear suspension. Around 60 per cent of parts are new, and the system has also been retuned, making the big Vauxhall keener to respond and resist body roll on a twisty road, without compromising motorway comfort.

Accompanying the new engine is a new look on the outside. It’s designed to improve the car’s proportions, and adds a wider grille and redesigned front bumper intakes to make the car seem lower and sleeker than its predecessor. It’s a solid effort, although the tail-lights look a bit too much like they’re borrowed from the Insignia’s Buick Regal sister model. Inside, the dash is much improved, with high-quality materials throughout.

The new eight-inch central touchscreen is easy to use, although the graphics are a bit old-fashioned, while the TFT instrument cluster is clearer and easier to read. The touch-sensitive heating controls on top-spec Elite models are smart, and help cut down on buttons, but the laptop-style touchpad for controlling the infotainment system isn’t so good. The pad is too small and it vibrates to confirm when you’ve selected something. You can’t turn it off and it’s off-putting. That’s a real shame, as rattles and shakes are something the petrol engine does a great job of getting rid of.