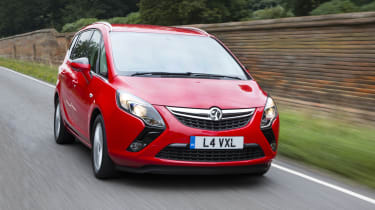 The Vauxhall Zafira Tourer is the first to taste the new 1.6-litre diesel, which was revealed at March's Geneva Motor Show. It's the first car to get the CDTI and a re-engineered six-speed manual gearbox.

The most striking thing is that this 1.6-litre is much quieter than the tractor-like 1.7 and 2.0-litre diesels currently on offer. At idle, when the smooth stop-start isn’t in operation, the engine is barely audible, but provides decent initial response as you press the accelerator.

As the revs build, the diesel remains smooth, generating an acceptable amount of noise and only transmitting a small hint of vibration through the steering wheel. It doesn’t make the Tourer feel especially quick, but that’s more to do with the fact that the compact MPV weighs more than 1,600kg before you’ve started filling its seats and 710-litre boot with people and luggage. The new gearbox is a big improvement, with a much slicker, positive action, although long gear ratios hamper the engine’s flexibility.

Even though it develops 320Nm of torque, you still have to downshift once or twice when arriving at a steep hill on a motorway. There’s a noticeable lack of engine braking in sixth when going downhill, too, despite the fact that the engine has energy recuperation to charge the battery when you’re coasting or braking.

There are no changes to the way the Zafira Tourer drives, so it remains competent and comfortable, rather than engaging like the Ford S-MAX. This new 1.6-litre engine is Vauxhall’s cleanest diesel ever, and is 10 per cent more efficient than the 2.0 diesel that’s also on offer in the Tourer.

It’s cleaner than the S-MAX’s 2.0 diesel, too. With fuel economy of 68.9mpg and CO2 emissions of 109g/km, Vauxhall claims the engine will save company car buyers around £900 in running costs over three years and 80,000 miles, compared to the 128bhp 2.0-litre. The latter may be more than £1,000 cheaper, but the frugal new engine’s smoothness is vastly preferable.