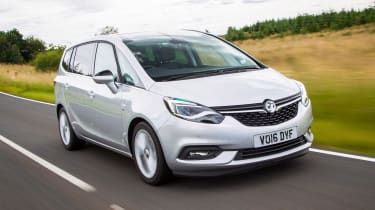 Keeping the Zafira Tourer at the top of its game is Vauxhall’s priority with this midlife update, which replaces the distinctive front-end treatment of the seven-seat MPV with a more sober, corporate face. OnStar personal assistance range-wide and an improved dashboard largely help to achieve Vauxhall's aim, although the uninvolving drive means it’s never a particularly exciting car.

Vauxhall’s biggest MPV, the Zafira Tourer, has led the sales charts ever since it was launched in 2012. With a 44 per cent market share year-to-date and nearly 16,000 units sold in the UK last year, it sits ahead of the Ford S-MAX, SEAT Alhambra and Volkswagen Sharan.

But it’s also under threat from smaller seven-seat models like the Volkswagen Touran and Renault Grand Scenic. So the time has come for a midlife update. Gone are the distinctive boomerang front light arrangements of the old car, replaced by a neater – if less idiosyncratic – face that’s not a million miles from the latest Astra. It’s still handsome enough, as large MPVs go. 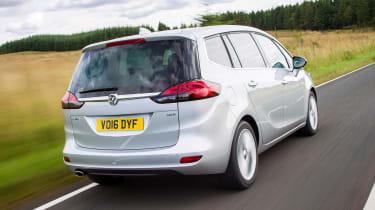 Inside, all the clever Flex7 seating technology and useful storage spaces remain, with the biggest change coming up front. The morass of buttons on the centre stack have gone, replaced by a neater touchscreen arrangement featuring Apple CarPlay and Android Auto, and there’s a new steering wheel design, too. It’s all perfectly pleasant and neatly laid out, if lacking any real visual sparkle or feeling of unstinting quality.

Along with the new Mokka X, the Zafira Tourer is a Vauxhall that now has the OnStar personal assistance service as standard, improving the connectivity functions of the car. Trim lines and engines are preserved from the pre-facelift car, with often confusing grades running from Design up to Elite Nav, alongside a choice of the 1.4-litre turbocharged 138bhp petrol engine or a pair of diesels – the 1.6-litre, 134bhp unit and the 2.0-litre with 168bhp.

Sales are split 50:50 between petrol and diesel, with manual transmissions favoured 3-to-1 over the automatic. Powered by the 2.0 CDTi engine, our Zafira Tourer added up to a hefty £29,160 in near-flagship Elite guise with a few choice options – although that’s less than you’d pay for most comparable-spec seven-seat SUVs.

The driving experience is much the same as it was, which means quiet and refined, but not as exciting as some rivals. The Zafira’s 2.0-litre engine is muscular and willing, easily propelling the big Vauxhall along, although it’s coarser and less acoustically isolated than the 1.6-litre ‘Whisper’ diesel. 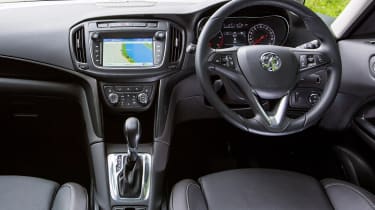 Elsewhere, the ride is fine – feeling supple in most situations and only flustered by the worst imperfections in the road. The predicted top-selling SRi model on smaller wheels would perhaps fare better than our car did on large 18-inch versions.

The steering is acceptable and the suppression of road and wind noise is first rate, while the Elite has the impressive panoramic windscreen to make the cabin feel suitably light and airy. It’ll also return a genuine 45mpg when driven carefully. Slightly short of the claimed 54.3mpg, yes, but impressive nonetheless.