It might not be a thriller, but the Vauxhall Zafira is undoubtedly one of the most influential cars of recent years. It was the first model to provide seven seats with flat folding rear chairs in a car the size of a compact family hatchback - and it started a revolution in cabin design. 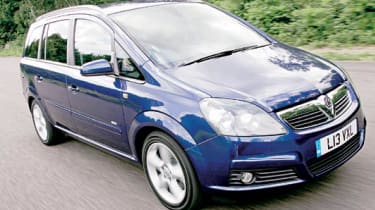 The all-new Zafira is a great family car. Just as the outgoing model was starting to feel dated, its successor is a contender for class honours. But we had hoped for a refined Flex7 system. To maximise cabin storage, customers will have to select the cost option of overhead lockers, which pushes the price above that of many rivals.

It might not be a thriller, but the Vauxhall Zafira is undoubtedly one of the most influential cars of recent years. It was the first model to provide seven seats with flat folding rear chairs in a car the size of a compact family hatchback - and it started a revolution in cabin design.

Six years on, an all-new Zafira has arrived in the UK. But does it have the credentials to make just as big an impact second time round? We took to the wheel to find out.

The German-built Zafira is smart and accurately designed. Although chrome trim at the rear will not be to everyone's taste, the people carrier looks much classier than its predecessor. It is not particularly stylish, but it is more memorable than, say, a Mazda 5.

Inside, the clinical efficiency continues. A lot of the switchgear has been borrowed from the latest Astra, but is positioned higher up the dashboard, so many of the buttons are more accessible and easier to use. Quality has also been greatly improved, too, with soft-touch materials and a solid feel.

But versatility has always been the Vauxhall's trump card. Its trademark Flex7 seating arrangement takes the centre stage once again - although the designers were so happy with the versatile folding system that they have made virtually no changes. The major addition inside comes in the form of overhead lockers, which are a whopping £850 cost option. That's a lot of money, but the price brings full-length sunroofs with blinds as well. Even if you do not choose the lockers, though, there is plenty of space for luggage.

On the road, the improvements in ride and handling are obvious. Based on the Astra platform, the new Zafira offers a comparatively smooth ride on Britain's bumpy roads. It loses little of its hatchback stablemate's cornering agility and is just as fun to drive, while the higher seating position gives a greater view of the road ahead. Our test car came with the flagship 148bhp 1.9-litre diesel engine, which combines punchy acceleration with 45.6mpg fuel economy on the combined cycle. A less powerful 118bhp version is also available, but the range-topping oil-burner - mated to a slick six-speed manual gearbox - is more rewarding for keen drivers.

Most buyers in this class value price over performance, though, and the new Zafira range starts from £12,995. The well equipped SRi diesel we drove is £19,595; add the cost of the overhead cubbies, and the latest model seems expensive compared with many rivals. That would be fine if it was as revolutionary as its predecessor - but it is not.