All-new, luxurious Vauxhall Zafira Tourer is set to take on the Ford S-MAX 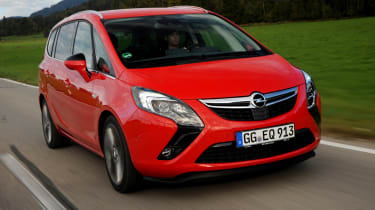 The Zafira Tourer is an impressive family car. It's much more expensive than any Zafira has ever been in the past, but the quality of the cabin materials and the cleverness of the seven-seater layout mean it justifies its high price tag. It may not be as sporty to drive as a Ford S-MAX - but to be honest we really like its comfortable ride and refined manners.

Advertisement - Article continues below
The Vauxhall Zafira Tourer is a new addition to the Zafira family, boasting a more modern design, more luxurious cabin and a bit more space. The two cars will be on sale together initially but expect the old model to be discontinued in the near future.
Video: watch our video review of the Zafira Tourer
[[{"type":"media","view_mode":"content_narrow","fid":"68784","attributes":{"alt":"","class":"media-image"}}]]
The Zafira starts at £13,995, while the Zafira Tourer costs from £21,000 – that’s expensive compared to the old car but the Tourer is designed to rival the Ford S-MAX, which it undercuts by more than £1,000.
As with any MPV practicality is all-important and the Vauxhall Zafira Tourer doesn’t disappoint – with five seats in place, boot space is 710 litres and with just driver and passenger seats it’s a huge 1860-litre load area.
Advertisement
Advertisement - Article continues below

There’s more space for passengers too and the Flex7 seating arrangement allows for individual chairs to be folded flat into the floor. You can arrange the cabin in a variety of ways because all the five seats are now individual. You can fold away the middle seat in the second row, giving the two outer passengers a handy arm rest. They also slide back and forth. In the third row, the two seats are fixed but you can easily fold them down and then lift them up again. There's room back there for children or small adults.
Advertisement - Article continues below
The engine line-up consists of a naturally aspirated 1.8-litre engine with 138bhp and a 1.4-litre turbo producing the same amount of power. There are three diesel engines too – all 2.0-litre units – with 109bhp, 128bhp and 161bhp. We drove the latter and it's a very good engine, being quiet and refined with lots of shove. The 0-60mph benchmark takes just 9.8 seconds, but it's the in-gear punch that impresses more.
The new chassis boasts front suspension borrowed from the Insignia and rear suspension is improved over the standard Zafira. Adaptive dampers are also available as an option. Turn into a corner and you'll notice that the steering is sharp, so the nose darts into the apex – but from there the soft suspension set-up means that it doesn't feel as precise or as much fun as an S-MAX. It also feels very large indeed. You can stiffen the dampers if you want, but the Zafira Tourer is ultimately tuned more for comfort (even on the 19-inch wheels of our test car), which is no bad thing.
The Vauxhall Zafira Tourer is available to order from November 2011 with deliveries starting early next year.
For live updates from the launch event follow lukemadden2 on twitter
Advertisement
Share this on TwitterShare this on FacebookEmail
Advertisement