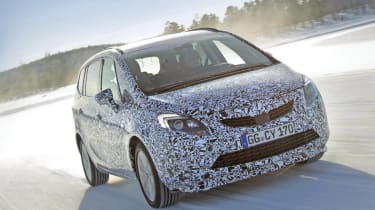 The Zafira is a key model for Vauxhall, with owner General Motors selling over 2.2 million worldwide since 1999 – and 438,430 found homes in the UK alone. Judging by this early encounter, the maker has done a fantastic job of building a practical family car that’s desirable. It’s much better looking and constructed, and sharp to drive too. Pricing will be absolutely crucial. We expect the new Zafira to start from around £20,000, but if your wallet can’t stretch that far don’t worry, the current car is staying in production, from £15,000.

Advertisement - Article continues below
Can an MPV really be cool? Vauxhall is confident its all-new Zafira has everything it takes to be the most desirable people carrier on the road. To see if that’s true, Auto Express joined engineers to test a prototype in the Arctic Circle.
Vauxhall’s current Zafira suffers from the problems that afflict most MPVs: it’s boxy, bland and dull to drive. But a stylish new look and even more flexible interior, plus a range of fast but frugal engines, should help the new model aim for the top of the class.
Advertisement
Advertisement - Article continues below

Although you can only see the overall proportions in these action shots, the final car will feature the boomerang-style headlight clusters first seen on the Ampera hybrid. It also gets Vauxhall’s new single-bar grille, and borrows the now familiar ‘blade’ crease in the side panels from the Astra and Insignia. The more handsome looks are a real acheivement, given that this new Zafira is longer and wider than at present.
Advertisement - Article continues below
British design boss Mark Adams said: “Just because a vehicle has seven seats doesn’t mean it should look boring. We also had to add to the Zafira’s practicality to meet the demands of the growing, active family – that’s why this model can switch from carrying seven to offering limo luxury for four in style.”
The original Zafira was a pioneer in the MPV class with its Flex7 seating. While rivals had fiddly, cumbersome layouts, the Vauxhall set-up let owners switch from seven to five to two seats at the click of a button, with the chairs stored flat under the floor rather than in the garage. And the newcomer takes things a step further. Not only has the firm improved interior quality, making the car a plush choice, but at the push of a button, the centre seat in the middle row folds to reveal a pair of armrests in the outer chairs. These can then slide back and towards each other, creating more interior space. Buyers can also specify an optional panoramic roof, which floods the cabin in light.
Engineers were determined to make the driving experience as polished as the rest of package, and after the time we spent with the car, we can report that they’ve done a fantastic job.
The newcomer feels just as composed and nimble as its main rival, the Ford S-MAX, and even though it’s strictly front-wheel drive, and wasn’t fitted with winter tyres or a clever ESP system, it coped well with the icy roads we drove it on.
On dry UK roads, customers can expect masses of grip.
The 1.4-litre turbo petrol engine – fitted to the concept at the recent Geneva Motor Show – was lively for such a small-capacity unit. But the refined 2.0-litre turbodiesel we also tried suited the Zafira better. And it’s capable of returning 50mpg-plus.
Advertisement
Share this on TwitterShare this on FacebookEmail
Advertisement