A minor power loss, then business as usual 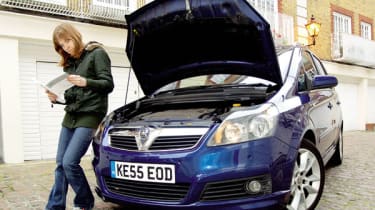 So near, yet so far! With our long-term Vauxhall Zafira due to leave the test fleet in less than two weeks, we were looking forward to telling you about an entirely problem-free 15-month tenure.

But it wasn't to be. Driving up a slight incline, the car suddenly lost all power and a warning light appeared on the dash. Acceleration was lacking in first and second, but the engine behaved normally through the mid-range. A check of the manual revealed the lamp indicates a fault with the engine or transmission electronics that may correct itself after switching the powerplant off.

Sure enough, next morning there were no problems and the Zafira was back to its usual self. Drama over - except, that is, for the strange clunking sound caused when turning the steering wheel. We're pretty sure this notchy feedback is mechanical rather than electrical, but as it's only recently started happening, we haven't had the chance to get it checked over.

It's unlikely either problem is linked to the work we had carried out to the Zafira, though. Vauxhall is now offering a one-stop shop called the VXR Performance Centre, where owners can 'pimp' their rides, so we decided to send our people carrier along for a makeover.

Located at the Griffin's British Touring Car team's facility near Banbury, Oxfordshire, we opted for a sporty bodykit (£1,500) and engine remapping power upgrade (£550). This was carried out in a few hours and doesn't affect the model's warranty.

However, the bodywork additions seem expensive for what you get, especially since the parking sensors had to be removed. What's more, although the extra power - up 10bhp to 160bhp in normal driving, or 195bhp with the Sport button engaged - is welcome, it makes the engine feel more sudden and aggressive than before.

Fuel economy hasn't suffered on account of this, though, and KE55 EOD sailed through its 20,000-mile service, which cost £167.71. Friendly and efficient Lance Owen in Richmond, Surrey, confirmed the two front tyres were due for replacement. In order to save money, I bought fresh rubber through online company E-tyres, who came and fitted them on site for £241.79.

Despite all this activity, one thing hasn't changed - the Zafira is still a great MPV. Although the seating layout isn't the most versatile on the market, it came into its own over the Christmas break, swallowing shopping and family members with aplomb. I'll be sorry to see it go.

Second opinion Maybe it's because I hadn't driven the Zafira for a while, whereas Dawn is in it nearly every day, but I noticed a few faults. The intrusive turbo whistle is now louder, the windscreen washers have given up the ghost - and there's also the steering defect. The wheel is now heavier at lower speeds, while a weird cog-like feel has developed. The noise goes when on the move - or perhaps I just can't hear it over the engine! Lesley Harris, road tester