The Zafira Tourer gets a bolder look and better quality, so how does it compare to the big-selling S-MAX? 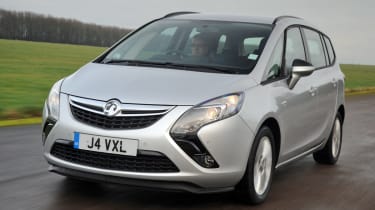 It's hard not to be impressed by how far the Zafira has come. Forget the old car’s minicab image; this new model looks great and has a classy interior. But by moving it upmarket, Vauxhall has put the seven-seater in the firing line of some very stiff competition. So while it’s a capable people carrier, it doesn’t have the space or dynamics of rivals. The Ford Grand C-MAX in particular is cheaper, nearly as roomy and much better equipped – so the Zafira may struggle to make the impact Vauxhall is hoping for.

Advertisement - Article continues below
There’s a lot riding on the latest version of the seven-seat Zafira. Vauxhall has taken the bold decision to transform its stalwart people carrier from a workhorse into a sleek and desirable alternative to pricier SUVs and the popular Ford S-MAX. So has the gamble paid off?
It certainly has on the style front, where the new Zafira successfully pulls together design cues from across the company’s current range. The angular front end with its ‘boomerang’-style headlights is inspired by the forthcoming Ampera electric car, while the upswept side blades along the doors are borrowed from the svelte Astra GTC coupe.
Advertisement
Advertisement - Article continues below

The overall effect is striking and really makes the Vauxhall stand out compared to the likes of the VW Sharan and SEAT Alhambra. This flair comes at a price, though; the 17-inch alloys and LED rear lights are costly optional extras on our test model.
Interior quality has taken a huge step forward over the previous Zafira. There are more soft-touch materials than before, as well as classy details like the soft ambient lighting and an attractive, if slightly fussy, dash.
Advertisement - Article continues below
Visibility is good, too, with a glass area in the A-pillars and a wide rear screen giving the driver an excellent view out. Fit and finish is on a par with the class leaders from Ford and VW, while practicality is as strong as ever.
The Zafira’s new Flex7 seating system is simple to use – switching between five and seven seat-layouts is easy. All the seats in the middle row slide independently, but the rearmost seats are strictly for children, as head and legroom are severely limited. Still, with only five seats in place the Zafira can carry 710 litres of luggage; fold the middle row, and this rises to 1,858 litres. However, the Ford S-MAX has a maximum capacity of 2,000 litres.
Advertisement
Advertisement - Article continues below
The boot floor is completely flat as well, and combines with the low loading lip and wide tailgate to give the Zafira greater flexibility than a traditional estate.
Advertisement - Article continues below
We drove this 163bhp flagship diesel on the European launch (Issue 1,187), and the slow throttle response and long gearing can make the car feel sluggish. But it provides plenty of in-gear punch and the rough initial edge to the engine note settles down on the move.
If economy is a top priority, you may want to look at other models in the range, but this car is still impressively efficient. Stop-start comes as standard, so it returns a respectable 54.3mpg and emits only 137g/km of CO2.
Out on the road, the Zafira shows good composure given its size, changing direction smoothly in corners with little body roll. The trade-off is a ride that feels bouncy on the motorway. Opt for bigger alloys, and this is likely to be even more of a problem. But while the Zafira is competent enough, it lacks the dynamic sparkle of rivals like the S-MAX. The steering is accurate, but the notchy manual gearbox will deter keen drivers.
The other problem is price. Our Exclusiv model isn’t that well equipped, but still costs over £1,500 more than the spacious Ford C-MAX. And while it undercuts bigger seven-seaters like the Alhambra, the Vauxhall is nowhere near as roomy.
Advertisement
Share this on TwitterShare this on FacebookEmail
Advertisement