Diesel version of stylish new seven-seater has already impressed, but now we try it in range-topping spec 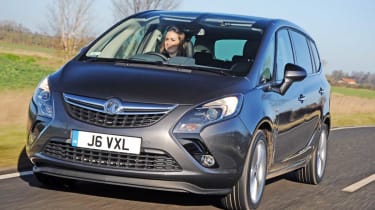 It's easy to be won over by the new Zafira Tourer’s stylish looks and upmarket cabin, but family buyers should think carefully before taking the plunge. The third row of seats is only suitable for younger children, whereas the Ford S-MAX can seat seven adults. If you want a car this size, then the Ford Grand C-MAX is a better choice – and it’ll be a cheaper one, too.

Advertisement - Article continues below
Family cars used to be worthy, great-value transport, but a recent trend for luxury and style in the class has led Vauxhall to take its Zafira upmarket – enter the Zafira Tourer. The £24,565 entry-level Exclusiv version couldn’t match its rivals in our road test in Issue 1,202, so does this £27,415 top-spec Elite model appeal more?
It’s expensive, but not short on kit. There’s a panoramic sunroof and windscreen, leather, heated seats, climate control and stylish ambient interior lighting. It all feels really well built and upmarket. If outright load space is a priority, the Ford S-MAX has the upper hand, but the Zafira is better at seating five people – which is how it will be used most.
Advertisement
Advertisement - Article continues below

The third row of seats in the Tourer is cramped compared to the Ford’s, and there’s 162 litres less maximum boot space, at 1,858 litres. On the plus side, Vauxhall’s new Flex7 seating system makes switching between five and seven-seat layouts easy. All the seats in the middle row slide independently. The middle seat can be folded down and its sides lifted up to make armrests for those sitting in the other seats.
Advertisement - Article continues below
Under the bonnet is the flagship 163bhp 2.0 CDTI diesel, which has plenty of in-gear punch and is well isolated from the cabin. Acceleration from 0-60mph takes 9.1 seconds, but there’s an initial hesitation as you floor the throttle, which makes the car feel more sluggish than the figures suggest. This Zafira also has stop-start as standard, which helps it to return 54.3mpg fuel economy and emit 137g/km of CO2 – identical figures to the lower-powered 2.0-litre diesel.
The Zafira Tourer will appeal to keen drivers. There’s very little body roll in corners and the quick steering gives an agile feel. We’ve previously driven a Tourer with the optional adaptive dampers (Issue 1,187), and the ride was more forgiving. It settled quicker, too – our Zafira Elite bobbed up and down more on bad roads.
Vauxhall was aiming to create a family car that offered style, luxury and practicality, and it certainly delivers the first two. But it lags behind rivals in the final and most crucial aspect.
Advertisement
Share this on TwitterShare this on FacebookEmail
Advertisement