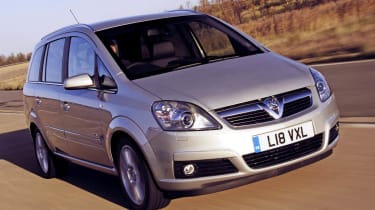 Despite this executive makeover, it’s clear that cracks in the Zafira’s appeal are starting to show. On the plus side, the interior still remains practical and – despite a few key omissions – the equipment levels are high. However, the Elite’s biggest problem is price. For an extra £290 you can have the excellent Ford S-MAX in range-topping Titanium specification.

Travel on a plane, and you’ll want to bag yourself a business-class seat. The space, luxury and sense of occasion make paying a premium seem worthwhile. Now Vauxhall is hoping that buyers will be similarly swayed by its new range-topping Zafira Elite.

The compact seven-seater has been around for a decade, but the MPV market has moved on. As Ford’s larger S-Max is proving, drivers want more glamour and prestige from their family motors – and they’re more than willing to pay for the privilege.

So, Vauxhall’s newcomer is priced at £22,705, yet comes packed with kit. It still has the same versatile and practical interior that has kept it popular for a decade. But does this makeover mean we’ll see Zafiras flying out of the showrooms – or can the forthcoming facelift not come soon enough?

Walk up to the Vauxhall, and you’d be hard-pressed to pick it out as the flagship of the range. Closer inspection will highlight the 17-inch, 10-spoke alloys, privacy glass for all the rear windows and aluminium finished roof rails. Otherwise, it’s all standard Zafira. Sadly, in the face of stylish competition from the Ford C-Max and Citroen C4 Picasso, it looks staid, and is starting show its age.

It’s a different story once you climb aboard. The Flex7 seating layout hasn’t been altered or updated much over the years, but it still offers great versatility. If you want seven seats, then simply unfold the two rearmost chairs from the boot floor. Stow them away again, and you have a healthy 645 litres of luggage space.

On top of this flexibility, Vauxhall has attempted to sprinkle in a little luxury with a covering of leather for the seats and steering wheel. That aside, the cabin remains unchanged, which means a commanding driving position – although the thick A-pillars cut vision – solid fit and finish, and decent quality materials.

Given the Elite’s elevated status, it’s a surprise to find that some desirable kit, such as parking sensors, sat-nav and the panoramic glass roof, costs extra. And any illusions of luxury are shattered once you fire up the 148bhp 1.9-litre CDTI diesel. Even when warmed through, the oil-burner sounds clattery and noisy at idle. Once on the move, it becomes more subdued, while its torquey nature suits the six-speed automatic gearbox.

Hit the dash-mounted sport button, and the steering, throttle and transmission become more responsive. On top of this, the Elite gets standard performance suspension, making it composed and capable in bends.

The steering is responsive, if a little weighty, while roll and understeer are kept in check by sticky tyres and a well sorted chassis. More importantly for a car aimed at families, the ride is comfortable, despite the stiff set-up.

If you want an even more engaging driving experience, then there’s always the 198bhp 2.0-litre turbocharged petrol, while those on a tighter budget can pick up the 1.8-litre petrol for £18,950.

Rival: Ford S-Max The stylish Ford trumps the Vauxhall for looks, space, handling and refinement. Inside, there is a seven-seat layout with a neat and simple foldaway third row, while build quality is top drawer.