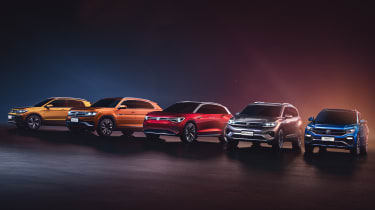 Volkswagen has made it loud and clear where it sees much of its growth in the coming years: the Chinese SUV market.

Ahead of the Shanghai Motor Show and broadcast to up to 10 million people in China alone, the brand announced no less than four brand new SUVs at a special event on the eve of the show. Some of them are concepts but all of them are production relevant to China, alongside a longer-wheelbase variant of the new T-Cross.

On stage, Volkswagen marketing and sales boss Jurgen Stackmann announced that the brand would have more than 30 SUV models on sale globally by 2025, accounting for exactly half of all cars wearing a VW badge.

One of those models will be the new Teramont X. It goes on sale in China next month, and is essentially a coupe-styled version of the huge Teramont, which is badged Atlas in the United States. It’s a vehicle we don’t get in Europe, because the brand believes it is too large to garner significant customer interest.

It’s one of two new coupe SUVs Volkswagen is presenting at Shanghai, alongside the SUV Coupe Concept. Although nameless, it is a more rakish take on the Tayron SUV – another model we don’t get in Europe. A market launch will take place in 2020.

A vision of a new flagship model is also making its debut in Shanghai alongside the new, all-electric ID. Roomzz concept. Called the SMV Concept it sizes up at just over five-metres long and is described as a sleeker alternative to the brand’s other big SUVs. Design boss Klaus Bischoff said that the eventual production version of the SMV Concept would become the most luxurious vehicle in the history of VW’s Chinese partnership with FAW.

Do you want to see more SUVs in the market or do you think there are already too many? Let us know in the comments below...