We get to grips with Volkswagen’s incredible Beetle Dune Concept car, which previews a forthcoming production version 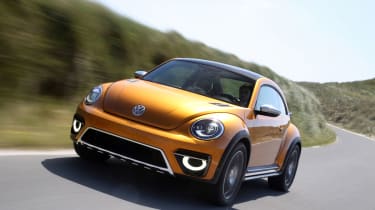 If there’s one thing the Volkswagen Beetle isn’t lacking in, it’s heritage and down the years Volkswagen has shown that it’s always on the lookout for ways to make that heritage pay.

With the Volkswagen Beetle Dune Concept, VW has picked up where it left off with the Beetle Dune Concept from 2000 but this is an all-new modern-day interpretation. What’s more, it’s all set to make the transition from showstar to showroom.

With coupe and convertible production models based on the Beetle Dune Concept scheduled to arrive late next year, Auto Express was invited to get an early taste of what we can expect.

Fresh from its debut at the Detroit Motor Show in January, the Beetle Dune Concept boasts significantly inflated proportions to distance itself from the standard model. The body is 48mm wider, 12mm longer and 50mm taller, while VW has also widened at the front and rear track by 29mm for a more aggressive road stance. 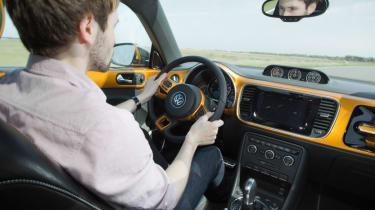 There was an initial identity crisis when the Beetle Dune Concept was first unveiled. The car was fitted with skis racks but took its design inspiration from dune buggies more at home in a blistering desert setting. VW states this was merely a tongue and cheek gesture and a nod to those dune buggies of the 70’s. Sadly the ski rack is a design feature, which will have to be sacrificed for production models due to strict safety legislation.

Oversized 19-inch alloy wheels fill the flared arches, which are trimmed with matt black cladding as see on other off-road focused VW Cross models. The front end is also completely new, dominated by the chunky bumper design and chiseled bonnet, under which VW has fitted the 207bhp 2.0-litre turbocharged petrol engine mated to a six-speed DSG gearbox. When the Dune production car is launched next year VW is keen to make the entire range of petrol and diesel engines from the standard Beetle available as well as the gearboxes.

So what’s the concept car like to drive? Climb inside and the elevated ride height gives a good commanding view of the road ahead. The added 50mm makes the Beetle Dune Concept feel more like a crossover than a conventional car, while the quirky interior paneling and instrument cluster remain unchanged from the standard model. 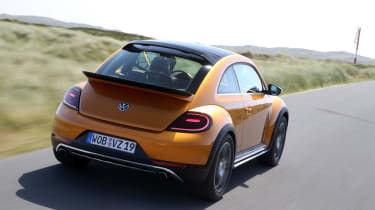 The engine and gearbox combination makes this Dune Concept quicker than any production Beetle you can get your hands on. The sprint from 0-62mph takes 7.3 seconds with a top speed of 141mph but despite its rugged and utilitarian image, the Dune will be front-wheel-drive only. The added weight, economy impacts and, most importantly, cost penalty of fitting a four-wheel drive system would alienate VW’s target customers, says the German marque.

The Dune comes fitted with the same electronic differential and sophisticated multi-link rear suspension as the Golf GTI, add to that the wider track and the Dune certainly feels more surefooted on the road.

• Best crossovers you can buy now

Of course, the restrictions of a concept car drive mean we were only able to get a basic idea of what a car is capable of. VW is hopeful that the concept as we saw it will make an almost unaltered switch into a showroom-ready model. If the German manufacturer stays true to its word we could be looking at the best handling Beetle there has ever been.

Does the forthcoming production version of the Dune concept appeal to you? Let us know what you think in the comments section below...