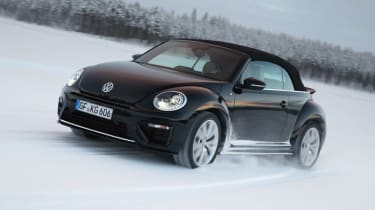 In standard guise the Volkswagen Beetle Cabriolet is a quirky and relaxing – if dynamically soft – cruiser. Yet, here it is cranked up with all-wheel drive system and the fastest version of the VW Group 2.0-litre turbo. But is it any better? Not really. It’s just a lot faster. Maybe this is one R version Volkswagen can skip in the future.

Unlike most of the cars in the VW group portfolio, the Beetle Cabriolet has never carried the burden of expectation from endlessly positive reviews. So to create some excitement about the possibility of a hot new production model, the brand has built an aggressive new prototype with four-wheel drive and a 278bhp motor.

The new engine is essentially the same as new the Seat Leon Cupra’s EA888 2.0-litre TSI turbocharged petrol and to manage the extra power, the soft-top Beetle had been re-engineered to accept a rear differential and four-wheel drive system.

However because the Beetle is built on the older chassis platform from the Mk VI Golf, rather than latest MQB underpinnings, some serious engineering work has gone on to make all the new parts fit together for this prototype – which previews the possibility of a Beetle R Cabriolet.

We tested the prototype at a special event held in northern Sweden, and despite none of the brand’s officials calling this test mule an ‘R’, the clear link is that all future ‘R’ models will get four-wheel drive. Sadly that is where the Beetle Cabrio’s problems start.

The older Beetle architecture had to be heavily adapted to accept the four-wheel drive system, a heavy-duty six-speed DSG gearbox and that new engine. While it all works in a functional way, it feels like the Beetle didn’t much enjoy having all its internals rearranged.

It does feel fast though – and VW claims it will post a 0-62mph time of around 5.7 seconds and the prototype Beetle R Cabriolet could surprise a few sports cars from a standing start. Speed is not the real issue though. This car retained the Beetle Cabrio’s significant scuttle shake, even with its soft-top roof firmly fixed in place, and its lack of compliance in the front suspension over bumps.

Unlike the new Golf R the ESP and traction control systems cannot be switched off – so on the frozen tracks we drove it on it felt no where near as dynamic, with near constant electronic interference stopping you having any real fun. Partly that was down to the fact that this prototype didn’t even have a button to switch it off.

The extra weight of the four-wheel drive system does mean it grips corners with a bit more eagerness and stability than the front-driven car, but the steering is far too light and completely numb too. There’s a chance this car won’t make production – and at the moment it remains an experiment to see if adding more power and performance can boost the Beetle Cabrio’s shaky credibility.