Volkswagen Polo R is confirmed, and we get behind the wheel of 250bhp four-wheel drive prototype 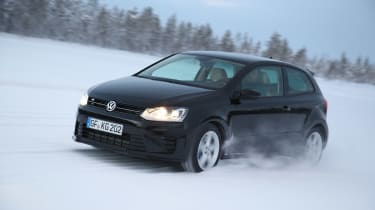 Fast, strong, agile and grippy, the Polo R prototytpe delivers an all-new dimension to the Volkswagen Polo. Depending on pricing (and Volkswagen insiders are suggesting it will come in at close to £22,000), this could be VW’s new cult car and will put more internal pressure on Audi’s upcoming S1. Who knows, perhaps it’s the final motivation Ford needs to finally give a Fiesta RS the green light.

Volkswagen won the World Rally Championship on debut last year with a pair of all-wheel drive Polos, and now it’s looking to cash in on that success. VW bosses have now confirmed that a 250bhp four-wheel drive Polo R will go on sale towards the end of this year, and we managed to secure a drive in a pre-production prototype.

Not to be confused with last year’s disappointing front-wheel drive 217bhp Polo R WRC from last year, of which only 2,500 were built, this runs a 250bhp turbocharged 2.0-litre engine and, even as a prototype, feels very well sorted indeed.

Our first drive of the Polo R was on the ice of northern Sweden, so while it’s not exactly a realistic road test, the initial signs are promising.It’s a quick little thing, even on baby spikes on a frozen lake. Volkswagen insists it’s a sub-six second sprinter from 0-62mph and that feels about right.

Under the bonnet a 250 horsepower version of the EA888 2.0-litre motor from the VW Golf GTI, which means it get direct fuel injection, variable valve timing and a healthily boosted turbocharger. It’s not a high revver, though, and can just as easily be driven on a torque curve which Volkswagen sources tipped at 350Nm, peaking below 2000rpm.

It mates this to a six-speed dual-clutch transmission, and send the power through the same multi-plate Haldex V centre differential as the more powerful Golf R. Putting a differential under the rear end necessitated some serious engineering changes, the biggest of which was tossing out the Polo’s torsion beam rear suspension system and replacing it with a four-link independent system.

The Polo R will be essentially the same car as the Audi S1 (which will be launched in March), right down to the centre diff, the transmission, the engine and the suspension hardware. The biggest difference is that the Polo R will run a family Polo dash, not the expensively trimmed Audi A1 interior, and that it will have a full steel body where the Audi has more aluminium in its front end.

Even so, the Polo R prototype feels more agile than the standard Polo without feeling to lose any of its trademark solidity and hefty large-car feel. It has so much traction that the throttle can be stomped on, even on ice, and you can expect the car to track straight and true. It’s also so agile that it can be made to change direction crisply with a small wrist flick on the steering and a little lift off to transfer the weight.Then, when the hard work is done, it settles easily into long slides more reminiscent of long-wheelbase cars.

It also rides very well and the interior of our prototype, while not representative of what the road car, doesn’t ask for any compromises over the standard car. One compromise Volkswagen isn’t talking about yet is weight, but there’s more than enough power and grip to offset another 50kg – the extra weight that a Golf R carries over a Golf GTI.

We also learned that a flurry of R models is expected very soon. As well as a Polo R, the Beetle is set to follow, as well as R version of the new-generation Scirocco and Passat in 2015.