The Volkswagen ID. Buggy concept was one of the stars of Geneva, and now we've been for a drive

The buggy you’re looking at is the 2019 equivalent of the classic Meyers Manx beach buggy, that used VW Beetle running gear so effectively in the 1960s. Well, that’s what VW want you to believe, because it’s actually a clever selling tool, showing off how flexible its new EV-dedicated MEB platform is. It could go into production, though, by the middle of the next decade, either with VW building it or the firm licensing it to other manufacturers. Here’s hoping it’s given the green light.

Meet the Volkswagen ID. Buggy. It marks the return of the classic VW beach buggy of the 1960s, and, just like that famous car, this new one promises to offer the same heady mix of open-air thrills and fun driving charm. But just before you visit your local VW dealer with flowers in your hair and singing the Beach Boys to place your order, there’s a sting in the tail.

Before we get to the rub, a small history lesson: the ID. Buggy harks back to the iconic dune-bashed creation of the sixties, with its big wheels, flat windscreen, bug-like eyes, sit-up-and-beg driving position and a Beetle engine slung out the back, behind the real wheels.

It was never a Volkswagen-designed car, though. Californian engineer Bruce Meyers came up with the idea of taking a VW Beetle chassis, shortening it and bolting on a fiberglass body. With a set of chunky tyres and the strong and tuneable Beetle engine fitted, it was hugely successful in 1960s desert racing. Initially offered in kit form, the buggy was put into production as the Meyers Manx. But by 1971 the original company had folded. 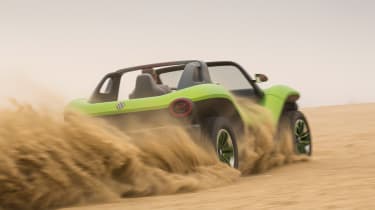 Fast-forward to 2019 and we’re driving a car that’s supposed to be evoking the spirit of the Manx. The ID. Buggy takes the very same idea as Meyers’s and brings it bang up to date. There’s the same bug-eyed front end, chunky tyres, a tall windscreen, two seats and simple bodywork bolted on that seems to be floating above the wheels. There’s a contemporary platform underneath – Volkswagen’s new ‘MEB’ architecture – and drive goes to the rear wheels, just like the Meyers Manx’s did. But it’s powered by something rather different.

The MEB platform is Volkswagen’s new architecture, designed specifically for its electric cars. There’s a whole range of them on their way, starting with the crucial, Golf-sized ID. 3 early next year. You can think of the ID. Buggy as using the ID. 3’s underpinnings – just like how the Manx buggy used the Beetle’s running gear.

There’s no engine but instead a 202bhp electric motor at the back, with an electronic differential. It’s powered by 62kWh lithium-ion battery. VW says a second motor, giving around 100bhp, could be added to the front wheels to make the Buggy four-wheel drive, something the Manx never was.

Inside, there’s the same rudimentary Manx spirit, with unadorned surfaces, washable seats, a drain plug in the floor, and a steering wheel. As a nod to its modern DNA, though, the steering wheel has volume controls on it, the gearbox is operated by a stalk and the pedals have play and pause icons on them. There’s also a roof – but it’s just a tarpaulin stretched from the rear targa bar to the top of the windscreen.

On the road, there’s no air-cooled soundtrack, but this aside, the ID. Buggy does drive like the original beach buggy in many ways. There’s the same wind-in-the-hair sensation, the view out over the bonnet is alike and there’s the general feeling of fun.

It’s good to drive, too, as the steering – borrowed from the ID. 3 – is light and surprisingly accurate – and (despite a 35kph limiter on the concept car) it's very quick to accelerate. The ride is nicely soft too; the more you drive it, the more you realise this is like no other typical, creaky, badly finished motor show concept car. It feels production ready.

That’s because it is – and, what’s more tantalizing, Volkswagen still hasn’t made up its mind whether or not to build it. Officially the ID. Buggy is a clever one-off to show how flexible its new MEB platform is. VW has already signed a deal with Ford for it to take the MEB architecture and build its own range of electric cars wearing the Blue Oval badge, and the Buggy is a nifty way of showing what could be done, just like the Manx did 50 years ago. It’s a pristine, set-dressed showhome in a new housing development.

However, there are signs VW is warming to the idea of building it, whether by making it internally or licensing it to low-volume manufacturers. VW bosses admit the project will ultimately come down to whether the sums add up and whether there’s actually a market for the car.

Of course, VW has its hands full with its new bread-and-butter electric car, the ID.3, and making that a success. But the ID. Buggy could happen, and that’s a very exciting thought.