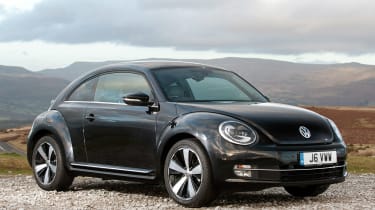 Used forecourts are awash with sensible family hatches, but if you want something that stands out, your options are relatively few and far between. In many cases ‘characterful’ can mean flawed and, while the Beetle certainly isn’t perfect, it strikes a pretty good balance of form and function. You get all the usual VW characteristics such as decent quality, efficient engines and excellent ergonomics, plus hatchback usability. Sure, the back seats are tight for space and the Beetle isn’t the last word in handling finesse, but it’s easy to drive and safe. It’s not the cheapest family hatch but when bought used, it’s not exorbitant, either.

Volkswagen’s original Beetle is the biggest-selling car of all time, with 21.5 million examples finding homes across the globe. When the first Golf-based Beetle arrived in 1999, it was known as the New Beetle – and VW was initially inundated with demand. Although the excitement eventually died down, this didn’t stop the company from coming up with a sequel.

Sadly for VW, the Beetle’s time had already come and gone by this point and, as a result, sales weren’t as strong – which was probably just as well, because supply problems meant it wasn’t easy to get hold of a Mk2 New Beetle for quite a while. However, the final iteration of the model is the one to have because it’s got the best engines, is the nicest to drive, looks the smartest and is made to the highest standard. What’s not to like? 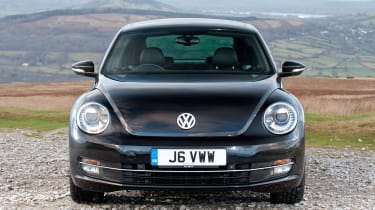 The Dune that followed in May 2016 had off-road-inspired looks, sat 10mm higher and used 1.2 TSI or 2.0 TDI engines. That August, a facelift brought R-Line spec, styling updates, upgraded trim and a revised dash.

Some naturally aspirated engines were offered on the first-generation New Beetle, but all second-generation models have a turbocharger, so even the 1.2-litre unit is fine, if unexciting. The 197bhp 2.0 TSI is very quick, but the Beetle’s chassis isn’t quite good enough to do the motor justice. We’d opt for a 1.4 TSI, or one of the diesels. 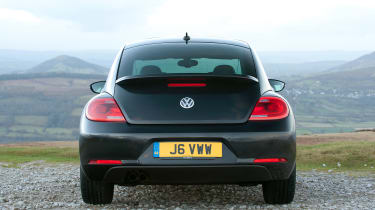 All cars have climate control, DAB radio with eight speakers, electric windows and hill-hold assist. Entry trim has 16-inch steel wheels, but move up to Design and 17-inch alloys are included, along with extra chrome trim for the cabin and exterior. Sport Beetles get 18-inch alloys, sport suspension and dual-zone climate control, plus privacy glass, cruise control and all-round parking sensors.

Alternatives to the Volkswagen Beetle

There’s no shortage of similarly sized hatchbacks available, but few have the style of the Beetle, and if you want a convertible, there are even fewer alternatives. The MINI is the closest, in that it’s well made, has retro looks and comes as a soft-top or hatch. The chic Fiat 500 has similar talents, although it’s smaller and not as well built as the VW.

Another car that’s stylish and available in hatch or convertible forms is the DS 3, but like the Fiat 500C, the open-topped DS isn’t a true convertible because it has merely a full-length, sliding cloth roof. Meanwhile the VW Golf, Renault Mégane, Mazda 3 and Ford Focus offer more practicality, but less style.

Some early cars could suffer from failure of the window-regulator mechanism, especially on the passenger side.

The window electrics can play up, so make sure the glass goes all the way up and down; sometimes it can stop short in either direction.

Some diesel Beetles were caught up in the VW emissions recall; check any potential purchase at tinyurl.com/y7nhdtht.

The earliest convertible roof motors can fail, but from summer 2013 a redesigned part was fitted. This is more reliable. 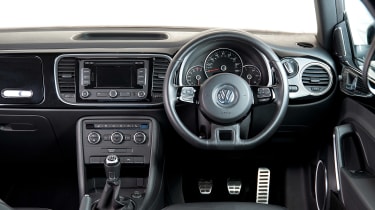 After the exterior, the Beetle’s cabin is a bit of a letdown because it’s rather low-key – although it’s well made and easy to use. The sculpted rear seats are comfortable, but there’s space (and belts) for only two occupants, which is reflected in the fact that the backrest has a 50:50 split instead of the usual 60:40. Boot space is 310 litres, or 905 with the seats down; the drop-top can hold just 225 litres.

Beetle owners can choose fixed or variable servicing, with the former set at 12 months or 10,000 miles. The latter allows up to two years or 20,000 miles. Once a Beetle turns three, cut-price maintenance makes a minor service £179, and a major £349. Most engines have a timing belt; replace every five years or up to 140,000 miles, at £494 including a new water pump. 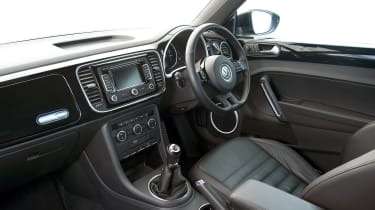 The brake fluid needs renewing after three years, then every two years, at £69. Long-life coolant shouldn’t ever have to be replaced. The air-con ought to be serviced every other year, at £139, alternating with a £29 refresh.

This Beetle has been subject to four recalls. Cars made from April to August 2014 need work for possible fuel leaks. Rear-axle damage and loss of steering control can affect models built before August 2013. Diesels up to November 2011 with stop/start may have a starter fault that can lead to a fire. Some Beetles built in April and May 2018 were fitted with sub-standard rear brake calipers.

The Beetle is too rare to make it into our Driver Power surveys, but the Golf Mk6 on which it’s based came 38th in our 2018 Used Car Survey. It rated mid-table for most categories, with practicality, running costs and reliability the low points. This provides some idea of the Beetle’s weaknesses. Our sister title Carbuyer gave the Golf 3.3 out of five, but owners reckon the Beetle is worth 4.3.