Does the all-new Volkswagen Beetle Cabriolet have the substance to match its style? We find out… 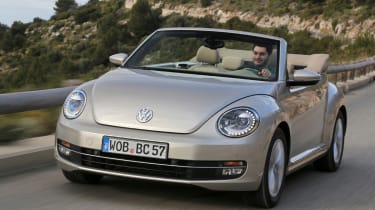 Despite being based on the Golf Cabriolet, the Beetle can’t match it in a number of areas. The ride isn’t as composed, handling isn’t quite as sharp and the interior quality isn’t as good. But there are still good reasons to go for the Beetle, notably its refinement and unique style. It’s also worth mentioning that buyers can save around £1,000 by opting for this Beetle rather than a Golf Cabriolet.

The VW Beetle Cabriolet’s history stretches back to 1949, so the latest model has a fair bit of pressure to deal with.

There are some obvious nods to the car’s heritage: pronounced wheelarches, a rounded front end and a fabric soft-top bunched up on the rear deck are all instantly recognisable Beetle visual cues.

Although this car is based on the previous Mk6 Golf, the interior has had a suitably stylish makeover. There’s a flat-bottomed steering wheel and a plastic strip across the dash finished in the body’s exterior colour. Yet while this all looks very nice, quality isn’t up to the standard of the Golf, as the dashboard is topped with some hard, scratchy plastic.

The engine line-up borrows from the Mk6 hatch, too – we’re driving the 1.4 TSI petrol model with 158bhp. As ever, it’s quiet, refined and smooth, with plenty of acceleration throughout the rev range. It claims 0-62mph in 8.6 seconds, but performance is leisurely rather than frantic.

And despite VW’s best efforts to make the Cabriolet sportier, you could say the same about the handling. It’s more prone to wallowing in corners than the Golf Cabriolet is, and suffers from more chassis flex and body roll.

In that sense, the Beetle definitely doesn’t feel sporty – at least not as sporty as the Golf – but unfortunately it doesn’t ride quite so well, either. Over potholes and large ridges, the Cabriolet shimmies and crashes more than you’d expect. It does smooth out rougher motorway surfaces, though, and impressive refinement with the roof raised adds to the car’s decent long-distance cruising ability.

There are other compromises to be found, such as the small 225-litre boot and how the folded soft-top restricts your over-the-shoulder visibility. However, typical Beetle buyers tend to favour style over practicality, so those issues will pose them less of a problem.

There’s definitely a place for the new Beetle in VW’s soft-top line-up. It’ll cost you £24,050 with this 1.4 TSI engine in top-of-the-range Sport spec, while the Golf Cabriolet will set you back £25,645 in similar GT trim.

So while it may not be quite as rounded or engaging as the Golf, and trails on quality, the Beetle is undoubtedly stylish and a good deal cheaper to buy.