What's it like to drive the world's fastest VW Beetle? We get behind the wheel of 536bhp monster in Utah 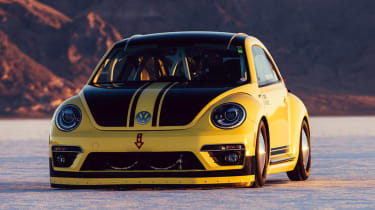 Less than a minute was long enough to realise this Bug is anything but boring. It’s the fastest Beetle on the planet, and while it’s a real challenge to drive, the sheer sensation of travelling at 200mph on a dry, dusty lakebed is something we’ll remember for a long time to come.

Many people consider the Volkswagen Beetle a lifestyle gimmick. Some owners even christen their cars with cuddly nicknames or adorn them in eye-catching accessories.

But the bright yellow Beetle LSR we have here is a little different. It’s a proper race car, with a 536bhp version of the standard car’s 2.0-litre four-cylinder engine. It’s the fastest Beetle ever, in fact, promising 200mph-plus in a straight line. And we’re in rural Utah, US, to drive it on a dry, dusty lake bed. 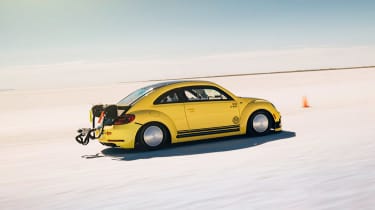 It takes two men to fix us into the driver’s seat, pulling the straps so tight that you can hardly breathe. They even fix your hands so that the range of movement is just enough to steer. This is no road-going Beetle, though. The engine shakes you to the bones, its roar finding a perfect resonance in the stripped-out cabin. Levers in the roof release parachutes to slow the car from three times the motorway speed limit. We’ll need those later...

Selecting first gear and lifting the heavy clutch pins you to your seat. The whopping almost 600Nm of torque forces the narrow tyres to squeak on the sand, and before long you’re fighting to keep the Beetle in a straight line. The runway feels quite crooked already, and the exhaust screams as a cloud of dust rises behind the car. The LSR hunkers to the ground, as the scenery passes like someone’s pressed fast forward. 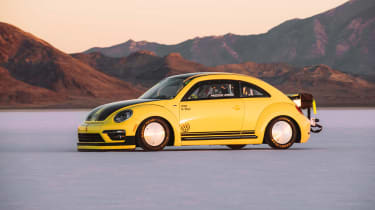 The LSR clicks and clacks through its gears, courtesy of what VW assures us is a heavily modified version of the road car’s six-speed manual. The Beetle hunts through the desert. Never before has the four seconds from 0-60mph felt as short as this – and we’ve only managed the first few hundred metres of the track.

Suddenly, the car becomes a raging vacuum cleaner, sucking in dust. The speedo reads 200mph, but as we pull for the parachutes everything is a blur. We’re suddenly sitting in an oasis of silence, hearing the dust lay down and waiting for our senses to catch up. Our ride on the cannonball is over.