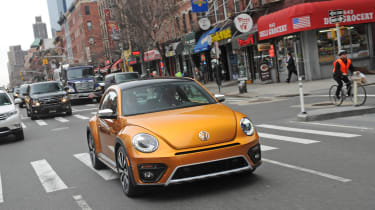 Pleasingly, this prototype version of the Beetle Hybrid felt anything but a prototype. The technology has been proven in the US-spec Jetta, and fits well within the Beetle body. The DSG gearbox shifts cogs seamlessly, and is far preferable to the droning CVT used by Toyota and Lexus – it’s just a shame we’re unlikely to see it make production in this generation of the car.

Volkswagen used the 2015 New York Motor Show as an opportunity to display four new special edition Beetle concept cars – three of which have since been confirmed for production. However, outside the show, on the streets of Downtown Manhattan, the brand was busy showcasing something altogether more intriguing.

Ignoring the ‘Hybrid’ badges on the wings, it’s standard Beetle from the outside. Inside, you’d be hard pushed to notice any changes, though this particular model has inherited the dials from VW’s super-efficient XL1 plug-in – to provide a battery charge readout within the speedometer. 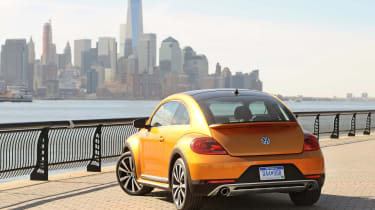 As in the normal Beetle, the central screen houses the car’s infotainment and sat-nav, with the addition of a Prius-esque drivetrain monitor. Due to this being a one-off prototype, our car’s display actually showed a Jetta saloon, but it gave us a clear representation of which power source (petrol, electric or both) was driving the car, or when the brakes were regenerating charge for the motor.

That’s not to say we particularly needed it. The Beetle will run on electric power for just over a mile alone at speeds of up to 30mph, but even the lightest prod of throttle kicked the engine into life with a bassy parp from the exhaust. While it was noticeable, it was hardly intrusive, and the sporty sound was actually rather pleasing around town. Lift off the accelerator and the engine switches off, while charge flows back to the battery – ready again for silent stop-start motoring. 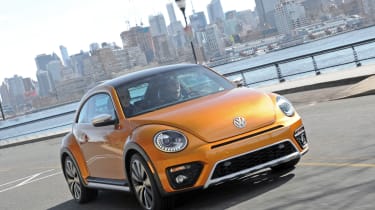 The seven-speed DSG automatic gearbox actually makes the Beetle prototype feel much like any other petrol-engined VW Group car. It shifts seamlessly, and never panics when the car switches from electric to petrol power. Put your foot down at a red light and the turbocharged engine bursts into life, offering a decent shove of acceleration.

While you can hardly call a 20 minute drive in busy New York traffic an in-depth review, our time in this hybrid Beetle was enlightening. Unlike the CVT system in a Toyota Prius, the VW utilises DSG to its advantage, making it one of