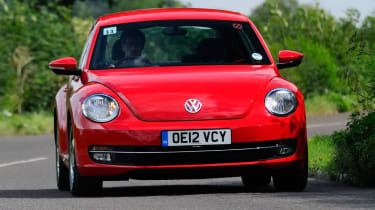 Opting for a diesel Beetle over the 1.2-litre petrol version costs only £1,050 extra, but it offers a much more laid-back driving experience and better economy. It’s cheaper than an equivalent Golf, too, so if you can live with the practicality compromises, the Beetle diesel is the best version yet.

Buying a new Volkswagen Beetle is a battle between your heart and head – while the retro styling looks great, that shape comes with practicality compromises. But now a diesel has arrived, so justifying it just got a bit easier.

The 2.0 TDI Beetle returns 57.6mpg and emits 129g/km of CO2, but only comes in mid-spec Design or top-spec Sport trims. Our Design model was well equipped, with retro 17-inch alloys, air-con and a DAB radio, plus the optional high-quality 400W Fender stereo (£500).

Also fitted were front and rear parking sensors (£355) which are also a wise investment, as the Beetle’s curves take some getting used to when you’re driving.

Naturally, the Beetle’s exterior design will polarise opinion, but Volkswagen’s mission to broaden its appeal has worked. The more upright windscreen, wider track and lower roofline certainly add attitude and cut into headroom slightly, but it’s less compromised than the old car. The interior is brightened by body colour inserts, just like the up!, and there’s plenty of Golf switchgear.

On the road, the diesel suits the Beetle’s laid-back character. It’s decent to drive, thanks to its Golf MkVI underpinnings, so always feels stable, even at higher speeds – although that’s when wind noise begins to intrude.

It’s at its best when you turn up the stereo and use the car’s mid-range punch to make serene progress. A DSG is available, but the manual is easy to use, plus it’s £1,595 cheaper. What’s more, the Beetle TDI is cheaper to buy than a Golf powered by the same engine.