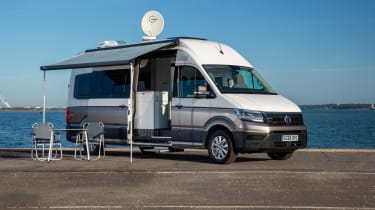 Some of the regular Volkswagen California’s charm has been lost in the Grand Cali’s growth spurt, but this is still a well thought-out alternative to the conventional motorhome. It’s filled with the sort of neat touches that campers love, and has enough self-sufficiency for its owners to sleep pretty much anywhere. As long as they’re happy driving something this big in the first place.

There aren’t many areas of the market where Volkswagen (or the VW Group) brands aren’t present - and yet the VW Grand California represents a leap into the unknown for the German giant. For as its name suggests, this new model tries to take the winning recipe that is the uber-practical California camper van and turns everything up to 11 in a bid to attract an entire different breed of customer: motorhome buyers.

VW didn’t have to look too far for a suitable platform on which to base its motorhome. For while most of the vehicles in the market are produced by third-party specialists who generally take something like a Fiat Ducato or a Peugeot Boxer and graft living quarters onto the back, the boffins at VW’s commercial vehicles division had the Crafter van at their disposal.

The result is a pair of Grand Californias, with enough additional mechanical options for the line-up to be called a range. The ‘entry point’ is the 600, which, as its name suggests, uses the six metre-long version of the Crafter. It offers sleeping quarters for two adults and, in a neatly faired-in bit of bodywork above the front seats, an extra ‘bedroom’ that’s big enough for children. 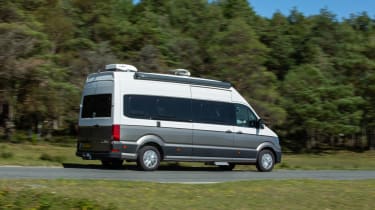 Then there’s the vehicle we’re trying here: the 680. It’s longer than the 600 (yes, 6.8 metres) and is also available with the option of four-wheel drive. But while it carries a price premium, it’s a relatively modest one, because it lacks the upstairs sleeping area; quite astonishingly, at the thick end of seven metres long, the vehicle sleeps just two people.

Now, this may seem perverse to those of you who are well accustomed to the regular California, which is almost two metres shorter but converts into a four-berth camper in a matter of minutes.

But here’s the trick. The Grand California offers levels of independence that its baby brother can only dream of. Because, as well as a kitchen hob, sink, fridge and freezer, the Grand California also has a toilet and a shower. Fill it up with water and gas and, provided there’s enough sun to feed the rooftop solar panel and keep the leisure battery topped up, you need not plug this vehicle in or, indeed, feel the need to visit a maintained campsite for days on end. And for some, that is freedom that’s well worth paying for.

And they will pay for it, because the Grand California starts at £68,899 for a 600; a 680 like the model we’re evaluating here costs from £71,395 - and that’s before you start to tick options boxes for niceties like the roof-mounted satellite dish, an additional air-con unit, an awning or a rear bicycle rack. VW’s offering is roughly in the same ballpark as many of the customised vans that are well established in the market, however. 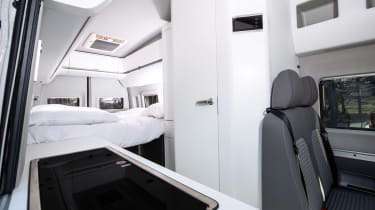 There’s no doubting that the Grand California is a special place to spend time - to the point where you may forget you’re parked in the middle of nowhere. It’s perhaps a little odd that the rear living space is basically used for storage - until you fold down the bed, which is both comfortable (thanks to flexible plastic supports below the mattress) and enormous.

The bathroom is a full wetroom, which means you just open the roof vent, have a shower and then allow things to dry out naturally. It’s all pretty clever, too - especially the sink, which drains away the water and then gets rid of the final few drops as you fold it away.

The kitchen space is a little narrow – you stand, in effect, in the galley between it and the bathroom door. But then your fellow occupants shouldn’t really be in your way because they have a table-and-seat area that joins up the space between the bathroom and the front cabin. Spin around the front seats and you’ll have comfortable area for four people - although it must be said that it will feel less lounge-like than some of the layouts offered by normal motorhomes, many of which are a little wider.

There are lots of nice touches - plenty of evidence, in fact, that Volkswagen has tried really hard to stitch the spirit of the original Cali into this bigger model. Open the sliding door and a grooved step slides out electrically to make it easy to reach the living space. The door features a mosquito net; so do many of the windows, as part of two-way sliding set-ups that also incorporate black-out blinds. 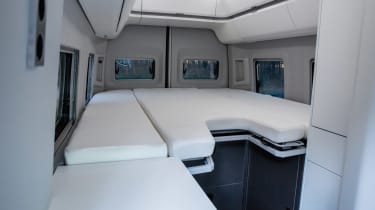 Fit and finish is pretty spectacular. It’s aimed at robustness and convenience - so there are plenty of wipe-clean materials. But it also feels well put together and there’s no arguing with the amount of space on offer in the aircraft-style overhead cupboards.

The tech is neatly integrated, too. Many of the living area controls – heating, hot water and so forth – are operated via a neat digital panel that’s right in your eyeline as you climb aboard. You can choose to heat the cabin using gas (the Grand Cali stores two big bottles) or electricity; a cool September evening forced us to fire up the gas heating during our test, but the system is quiet - certainly less noticeable than the auxiliary heater in the regular Cali van.

The driving environment is pretty much a straight lift from the Crafter. You get an eight-inch touchscreen infotainment system with Apple CarPlay and Android Auto included, a heated leather steering wheel, air conditioning and cruise control with a speed limiter. Again, the finish is rugged, with hard plastics on the dash and rubber flooring.

Underneath it all is a 2.0-litre four-cylinder diesel engine producing 175bhp and  410Nm of torque. In our Grand Cali it’s driving the front wheels via an eight-speed automatic transmission. The powertrain has enough shove to keep the Grand California moving at a comfortable motorway cruise - but any request to get to that speed at anything other than a leisurely pace will send the diesel motor’s revs rising to quite a throb.

At least it’s drowned out on a move, mostly by wind noise as the big VW smashes a hole in the air. And when it’s not being stressed, the gearbox is a sympathetic companion, shifting up early where possible, usually smoothly.

It’s comfortable enough, too; the suspension set-up does a fair job of keeping body roll in check without feeling too rigid over the bumps. And of course, the view out of the windscreen is excellent, thanks to that van-height seating position. 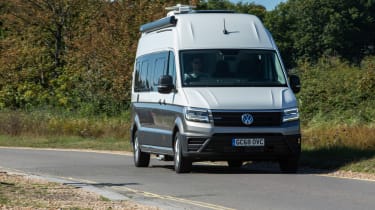 What the Grand California cannot escape (especially in 680 trim) is its size. Glance in the rear-view mirror and the back door looks like it’s in another postcode. And while there are double mirrors at each side – including smaller items designed to give you a better idea of what the edge of the road looks like – you’ll still feel very aware that you’re driving a 6.8-metre-long behemoth.

Indeed, just as the Grand California’s self-sufficiency offers its owners freedom on the move, so the size of the thing could put them off tighter, more scenic routes. It’ll certainly rule them out of car parks, too - including ones where a regular Cali would be in its element. Of course, these traits are applicable to many of the Grand California’s motorhome rivals.

VW is still holding back many of the Grand California’s numbers, including its official fuel economy and CO2 emissions. But over a test route that took us on A and B-roads, motorway and around town, we saw a figure just north of 26mpg. Which doesn’t seem bad for a vehicle that weighs 3.8 tonnes.

Speaking of which, you’ll need to make sure your driving licence has a C1 rating that allows you to drive something this heavy; if you passed your test after 1 January 1997, this could be an issue.