Want a reliable, stylish prestige car without the high price? The big VW is worth a look 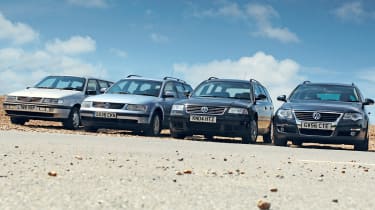 Passat MkIV The first Passat arrived in 1973, and soon gained a strong reputation for practicality to go with its premium image. Solid build means cars dating from 1989 – with their jelly-mould design – are still in circulation. But we think the more conventional MkIV is a much better bet.

This model arrived in 1994, and with a 90bhp 1.9-litre TDI turbodiesel under the bonnet, can return up to 52mpg. There’s also a non-turbo oil-burner, although it’s a sluggish performer, delivering 0-60mph in 17.7 seconds. Petrol 2.0-litre cars, especially the 16v, feel quick by comparison and are cheaper.

Pay from as little as £300 for a high-mileage saloon, while the estate starts from £500. At this end of the market, prices are determined by colour (light metallics sell well), condition and what’s under the bonnet. The TDI is the most desirable engine, although whatever you go for, CL and GL specs come with ABS. Some even have air-con as standard.

Bodywork is generally sound, with rust rarely a serious issue, but some cars will now be looking tatty. Engines are strong, yet broken electric window regulators are expensive to fix and central locking failures are common.

Passat MkV As well as offering improved design inside and out, the MkV boosted the Passat’s reputation for space, reliability and refinement. The smooth styling still looks good today, and despite truly affordable prices, it holds the premium appeal many newer mainstream cars would dream of.

A compromise for those wanting pace and reasonable economy is the 20v 1.8-litre turbo petrol. ABS was standard, while climate control was fitted to non-sunroof SE and Sport models.

Finding a decent MkV should be easy, and the arrival of the MkVI has hit prices. Pay as little as £800 for a saloon, while a late, clean, low-mile 115bhp TDI estate can cost up to £5,000.

Passat MkV facelift Volkswagen spruced up the Passat in 2001 by adding chrome around the windows and a new grille, but tweaks under the skin also made it better to drive and more refined. There’s also a wider range of engines – including the very capable 130bhp 1.9-litre PD TDI, which covers 0-60mph in 9.9 seconds and returns 48.7mpg.

The saloon is a fine alternative to the likes of the Ford Mondeo and Vauxhall Vectra, and has a 475-litre boot. But the estate, with its 1,600-litre maximum space, makes more sense.

Most cars are well equipped, with climate control as standard, yet the higher-spec SE and Sport models are the wisest buys. While the allure of the VW badge makes the Passat pricier than a Ford or Vauxhall, it’s cheaper than prestige equivalents from Audi and BMW.

Some of the best-value cars are the run-out Highline TDIs, which get equipment such as leather trim and heated seats. A 2005 estate version will be £12,000 on a dealer forecourt.

Get a full history and you should have few problems, but watch out for the 60,000-mile cambelt change, which costs £410 at a main dealer. As with the pre-facelift car, it also pays to listen for knocks from the front suspension.

Passat MkVI The latest Passat ticks all the executive car boxes, but it’s still rare used. It’s bigger than its predecessor, so the cabin has more space than before, and the estate offers a huge 603-litre boot that extends to 1,731 litres with the seats folded. That’s 71 litres more than an Audi A6.

Transmission options include a new six-speed manual; on bigger-engined cars, you can even get VW’s clever twin-clutch DSG box. As a result of this, the Passat has been transformed from a classy workhorse into a luxurious family car.

As the MkVI only arrived last year, it’s early days in terms of common faults. But it’s vital you check the paperwork and ensure there’s no outstanding finance, especially on private buys.

The best deals will be nearly new pre-reg cars or ex-demos. Main dealer prices for petrol estates start at £11,500; the cheapest TDI will be £1,500 more. Go for a model with desirable options such as parking sensors, and avoid the entry-level S, as it could be difficult to sell on.