The Touareg's V6 engine is well made, but many would prefer the SE spec trim over the Altitude's 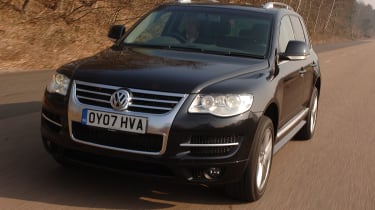 This VW combines the best and worst aspects of the Touareg. Under the bonnet is the pick of the engine range. The V6 diesel unit is well up to the job, both on and off the tarmac, and comes with a huge cost saving over its V10 brother. However, most buyers will be better off with SE spec rather than the top-of-the-range Altitude trim. Unless you like the garish bodykit, the cheaper, more discreet variant is likely to suit your 4x4 needs.

Times have never been tougher for luxury 4x4s. Environmental concerns are putting gas-guzzling cars under the spotlight more than ever before.

So, to keep its big off-roader in the headlines for the right reasons, Volkswagen recently revised the Touareg. In Issue 949, we were impressed by the V10-powered model's talents - but does the flagship Altitude trim, with a more affordable, less polluting V6 diesel, scale new heights?

We drove the previous-generation Altitude in Issue 924, and its successor has as much visual impact. It's now established as the top model in the three-trim line-up, and the most striking feature is its bodykit.

With unique bumpers, side skirts and a roof spoiler, the Touareg has never been more imposing. In fact, the lower bodywork entirely changes the big 4x4's proportions - with less ground clearance, it has the stance of a large estate. Other styling additions include stainless steel-finished twin exhaust pipes and huge 19-inch alloy wheels, which give the VW the image it needs to tempt Range Rover Sport buyers. The Altitude also benefits from the latest Touareg's Eos-style radiator grille and reshaped headlights.

Inside, the range-topper is fitted with a raft of equipment as standard. The Touareg's cabin still isn't all that exciting, but it's solidly put together, comfortable and practical. This model comes with everything from dual climate control to leather trim.

However, to get the specification of our test car you need deep pockets. Raid the options list - which ranges from a £325 tyre pressure monitoring system to a £2,495 air-suspension and bi-xenon headlight package - and the figure balloons to £46,300. If you stick to the standard spec, the price of the V6 diesel stays at £38,375 - that's £17,675 cheaper than its V10 oil-burning big brother.

The good news is that the engine demands few compromises. Mated to the standard six-speed automatic transmission, its 500Nm of torque pulls strongly in both city traffic and at motorway speeds. The gearbox is the model's biggest hindrance, as it has a reluctance to kick down that often sees the driver reaching for the much sharper responses of sport mode.

The lazier pace of this variant also fits in far better with the Touareg's character. Handling and body control are adequate for a large mud-plugger, although the VW is no driver's car.

No matter which engine you go for, the Altitude is fitted with the latest Touareg technology. A key safety feature is ABSplus, which cuts braking distances over rough surfaces by allowing a bow wave of gravel to build up in front of a skidding wheel.

It won't ever be described as a green car, but the Touareg remains a practical and luxurious all-rounder.