We give our verdict as the Hybrid version of the luxury 4x4 hits British roads for the first time - is the innovative petrol electric drivetrain worth the extra outlay? 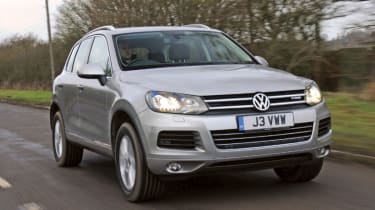 In general, the Touareg is a likeable and capable vehicle, and the hybrid powertrain is an interesting proposition. However, despite the refinement and performance on offer, this model can’t deliver the emissions or economy needed to make it a worthwhile purchase. Factor in the £54,995 price, and we can’t help feeling that buyers would be happier with the extra £16,740 in their back pocket and a 3.0 TDI Touareg on their drive instead.

Is this the ultimate Touareg? VW is hoping for a hit with the all-new Hybrid version of its SUV, which is claimed to give amazing performance and decent economy. We took a drive for the first time in the UK to find out if those boasts are realistic.
The car shares its drivetrain with the Porsche Cayenne Hybrid. That means the supercharged V6 from the storming Audi S4 works in conjunction with a 35kW electric motor, to give a total of 375bhp. As a result, the off-roader sprints from 0-60mph in only 6.5 seconds and can hit nearly 150mph.
Video: watch CarBuyer's video review of the VW Touareg

[[{"type":"media","view_mode":"content_narrow","fid":"69261","attributes":{"alt":"","class":"media-image"}}]]
The newcomer also features stop-start, plus energy recovery during braking or coasting. The latter transfers kinetic energy back into the battery for when the Touareg is driven in electric mode – which it can do at up to 30mph.
However, you’ll need a light right foot, as any more than sedate progress wakes the V6 into life. Accelerate hard and you’ll notice a hesitation, followed by a slight jerk, as the engine catches and the transmission takes up the slack.
The electric motors and battery pack increase the kerbweight to 2,315kg. That’s 141kg more than the 3.0-litre TDI, and it shows up on poor surfaces and through bends. At low speed the suspension has a harsh edge, but this improves as your speed increases. Also, corners provoke considerable body roll, despite there being plenty of grip.
On the outside, the Touareg follows the current VW family look, with subtle badging the only thing to set the Hybrid apart from other models in the range. Inside, there’s an eight-inch colour screen to show how power from the engine and electric motor are divided on the move.
Otherwise, it’s logically laid out, roomy and well built. Plus, you get a lot of kit, although we don’t think the cabin feels special enough for a car with a £50,000-plus price. If you’re thinking of heading off-road, the Hybrid uses a simplified 4MOTION set-up rather than the more complicated 4WD system available on some Touaregs.
This permanent device allows electronic diff locking on all four wheels and includes hill-descent control for steep slopes. So, does this petrol-electric SUV score at the pumps? In a word, no! Over 1,185 miles, we averaged only 23.9mpg – some way behind VW’s official 34.4mpg claim. You’re better off with the diesel, which is nearly as fast, more economical, has a similar CO2 output and costs £17,000 less.
Rival: Lexus RX450h
The hybrid-only RX doesn’t offer quite as much performance as the Touareg, but it makes up for this with claimed economy of 44.4mpg – that’s 10mpg more than the Volkswagen promises.
Share this on TwitterShare this on FacebookEmail