The striking VW Tristar might only be a concept, but it hints at the future of VW's commercial vehicles 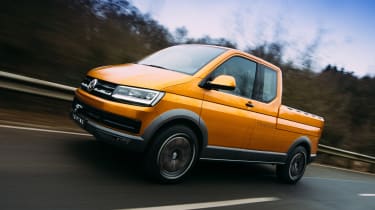 The Volkswagen Tristar won't enter production in anything approaching its coffee machine-equipped 4x4 pick-up form, but there are features that we'll see on the new VW Transporter van. It's one of the most visually striking commercial vehicles we've ever laid eyes on but the tough, off-road styling on the outside disguises a spacious vehicle that's comfortable and easy to drive. We're sure there are quite a few businesses that would bite VW's hand off if they ever did decide to put the Tristar on sale.

We're used to seeing concept cars from the biggest manufacturers glistening on motor show stands, but concept commercial vehicles like this Volkswagen Tristar are a lot rarer - and being able to drive them is even more unusual.

The VW Tristar is a striking pick-up concept based on the Transporter van that shares its basic design with the 1980s Volkswagen T3 Syncro - a four-wheel drive version of the iconic LCV. There was even a special edition Tristar model back in the 80s, which came with a 2.1-litre petrol engine and a double cab.

VW's latest Tristar isn't a double cab, instead it gets an extended single cab with extra space behind the driver and passenger. It rides high on 17-inch alloy wheels with huge 245/70 BF Goodrich tyres, which hint at the Tristar's permanent four-wheel drive mechanicals. Chunky plastic body cladding completes the off-roader look. 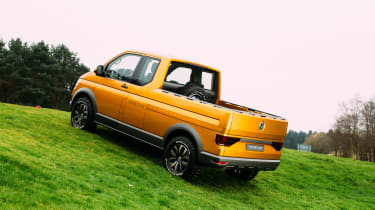 The concept looks great, thanks to its clean lines, rugged stance, neatly-designed lights and striking orange paint (which is actually also available on the new VW Caddy). It's got a number of exterior storage spaces, with a huge drawer that pulls out from below the pick-up bed and a deep tray that you can access from a catch behind the driver's door.

The interior is particularly plush, and way beyond what you'd expect in a production van, with soft brown leather covering the seats, steering wheel, armrests and even the door pockets. There are two individual seats, rather than a bench, and some extremely posh kit can be found hiding behind them.

This being a concept van, you can't blame VW for going all-out with the equipment on board: there's a coffee machine, a fridge, a pull-out table with an integrated touch-screen tablet and a set of cameras for video conferencing. The chairs are supposed to swivel around to face each other for in-van meetings, too. 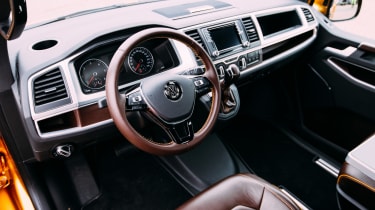 All of this futuristic kit is supposed to give an insight into what tomorrow's commercial vehicles will be like. Although the next VW Transporter isn't likely to feature a built-in coffee machine, we expect that the front lights and grille design will make their way onto the new model in some form. The concept's car-like dashboard should appear on a future model too, with its large display screen, soft-touch materials and useful storage spots.

The Tristar concept was limited to 30km/h on our test drive, which seemed to upset the 7-speed DSG automatic - it wouldn't stay in the right gear when bouncing off the speed limiter. It was good to drive at low speed, however, with the huge tyres, comfortable seats and raised ride height contributing to a smooth ride. The tyres don't affect the steering, either: the Tristar feels light and easy to manoeuvre. 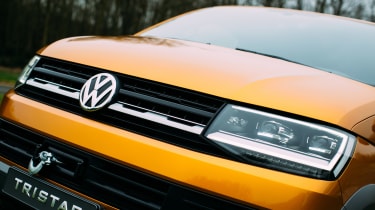 The 2.0-litre TDI diesel under the bonnet feels more than powerful enough - with 201bhp and 450Nm of torque it's got more shove than any engine in the current Transporter panel van and it's pulling less weight thanks to the pick-up body of the Tristar.

The striking-looking pick-up feels very car-like to drive - and that's something future Volkswagen commercial vehicles will likely try to emulate. If you ignore the rugged styling, the fridge & coffee machine inside and the pick-up load bay at the rear it's easy to imagine how the new Transporter's design will grow out of this concept.