We get behind the wheel of a prototype VW up! GT, which promises to live up to the Lupo GTI legend 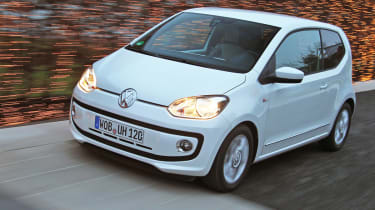 The Lupo GTI was one of the best hot hatches VW produced in the early 2000s. And this up! GT is its spiritual successor. Although the chassis on this prototype clearly has more development time – it's a year away from going on sale after all – we reckon the GT has all the makings of a smash hit for VW. It takes the virtues of the standard car - space, quality and comfort – and adds some real excitement. The new turbocharged engine is charismatic and punchy – we just hope VW's engineers tune the handling to offer a great balance between fun and comfort. It should be a much easier car to live with than a Renaultsport Twingo, and deserves to be a big success.

It's the pocket rocket that doesn't wear the famous GTI badge, but promises to live up to the legend. The up! GT is a new hot hatch version of VW’s excellent city car – and although it’s not due on sale in the UK until early next year, Auto Express took a test drive in one of only two prototypes in existence.

A black version is used by VW chairman Dr Martin Winterkorn, while this white car is product chief Dr Ulrich Hackenberg's. Both men are said to be enormous fans of the project, which gives VW a spiritual successor to the much-loved Lupo GTI.
Video: Watch Carbuyer's video review of the VW up!
[[{"type":"media","view_mode":"content_narrow","fid":"68821","attributes":{"alt":"","class":"media-image"}}]]
The prototype you see here doesn't look as racy as the Frankfurt Motor Show concept because it's simply a working testbed. VW calls it the up! TSI, because of its turbocharged engine.
Don't fear though – the finished car will look just like the concept. It will get larger wheels and tyres  – up to 17-inches in size – and a mild bodykit with bigger, more aggressive air intakes at the front.
In fact, the front end will be around 15mm longer than the standard car's to incorporate a radiator that's twice the size. At the back will be a diffuser with racy exhaust pipes and a roof spoiler.
Inside are more supportive seats with GTI-style tartan upholstery, and some added metal trim to brighten things up a bit.
Under the skin, the up! GT has 50mm lower suspension with stiffer dampers, plus a more potent engine, in the shape of a 108bhp turbo version of the standard car’s three-cylinder petrol unit. It’s hooked up to a six-speed manual gearbox – one more ratio than the base car to improve acceleration.
On the road, the engine really impresses. It's certainly punchy – VW claims 0-60mph in around 8.5 seconds – and despite only having 173Nm of torque, it’s responsive at low revs. There’s little in the way of turbo lag, and it pulls strongly all the way from 2,000rpm to the redline.
Factor in a brilliant soundtrack - think Porsche 911-lite – and the potential to do at least 60mpg, and you’ve got a combination that will put a smile on your face. Our prototype suffered from quite a lot of induction roar, but expect the finished version to have a new exhaust system that will make it sound even sportier.
According to up! engineer Torsten Oehmke, the chassis is "80 per cent finished" and we'd certainly agree it needs a bit more work. Although the suspension is firmer than the standard car's, we think it could be made even stiffer to resist body roll better – there's quite a lot of lean under heavy cornering – and make it feel more positive. The steering needs to have more weight than the standard up! too. It turns in to corners well though, and the controls, despite being light, are precise.
With 185/55 section tyres on 15-inch wheels, it was hard to assess the prototype's ride – it felt comfortable as you might expect. On bigger wheels and with lower profile tyres, the finished car won't be as compliant, but we'd still expect it to be much easier to live with than a Renaultsport Twingo. The finished car is also expected to get disc brakes all round, although the discs front/drums rear set-up of the prototype was strong.
Ignoring some of the unwanted engine noise for a moment, what also impressed was how grown-up the GT felt. Just like the standard up!, it feels like you could do long distances with ease. And there aren’t many cars of this size you can say that about.
Share this on TwitterShare this on FacebookEmail