The greatest Volvo estate cars: 60 years of load-lugging and labradors

Forget crossovers, for ultimate practicality the estate is still king and after 60 years building the things, nobody does estates like Volvo 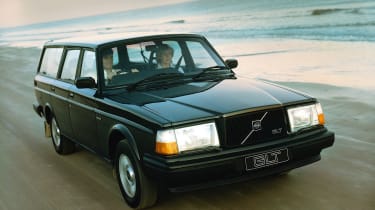 The Volvo estate car has an iconic image that’s been built over 60 years of trotting out practical wagons designed to simplify family life. Now, with the new Volvo V90 estate on the way, what better time to cast our minds back to some of the stand-out Volvo estates from yesteryear.

The Swedish manufacturer’s no-nonsense (and sometimes slightly boxy) approach to estate design has been the foundation of the Volvo estate legend but that’s not to say boring practicality is all an estate can do. Just look at the 1800 ES, the sibling to the P1800 driven by the impossibly suave Roger Moore in ‘The Saint’. And anyone who thinks ‘estate’ is just another word for ‘slow’ ought to be quietly directed to the Volvo 850 Super Touring Car that seemed to spend more time on two wheels than four. 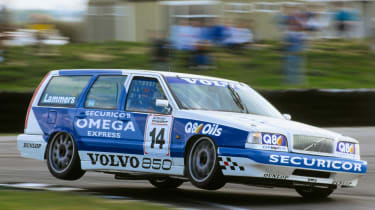 The new Volvo S90 is already shaping up to be one of the best premium saloons out there, so it was only a matter of time until Volvo added an estate version to the line-up. The new V90 will be released on February 18th – and with design features lifted from the Auto Express-award-winning XC90 we can hardly wait to see what it’s like to drive. Until then, though, here’s a look back at some of the V90’s greatest ancestors. 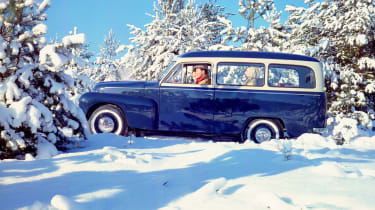 The ‘Duett’ name was chosen for this estate car to signify its dual-purpose approach – a delivery vehicle during the working week, and then a comfortable family car at the weekends.  As one of the first Volvo models exported to the United States, it remains fondly engraved on Swedish hearts – and was immortalised in 1997 with its own postage stamp.

We’d probably consider the Duett a van-based people carrier today, and there was indeed a panel van version available. Still, the overall shape is unmistakeably that of an estate car, so it’s worth a place on this list. 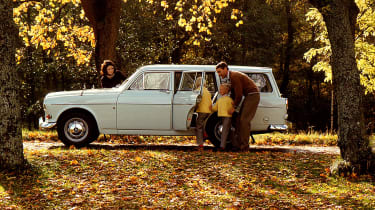 Unmistakably a Volvo estate, half a million of these cars were produced and a great deal of those were estates. US cars of the 1950’s inspired the styling, and the Amazon also holds the distinction of being the first car ever fitted with a standard three-point safety belt.

The Volvo Amazon is one of the most iconic classic Volvos, and its underpinnings would go on to create an even more recognisable car – the 1800 ES. 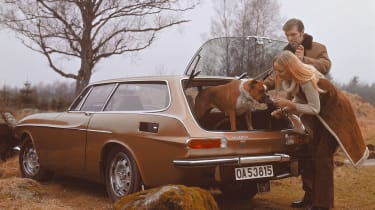 Volvo introduced the final P1800 variant 11 years after the original coupe, but the 1800 ES is one of the most recognisable cars built by the company. The three-door ‘shooting brake’ style would go on to be used by the 480 and C30.

Despite the gorgeous looks, the 1800 ES used the underpinnings from the staid and sensible Amazon – making it more of a stylish touring car than a true sports car. The 1800 ES was only in production for two years, as the underpinnings were by then over 15 years old. Updating the car for stricter US safety and emissions standards would have proved too costly so Volvo dropped it from the lineup. 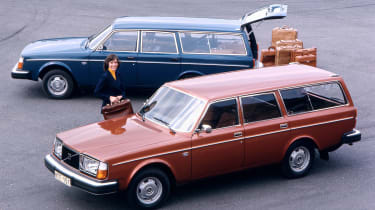 Ask anyone to draw you a Volvo estate and the 245 is probably what they will come out with.  The boxy shape, upright grille and vast glass area come together in a car so straight-edged, it’s a wonder they didn’t make the wheels square.

It wasn’t all about uncompromising practicality, though. Six-cylinder engines were available, and the 1980’s even bought the 245 Turbo edition – the world’s first turbocharged estate car. Can we consider this the spiritual predecessor to the 189mph Audi RS6? 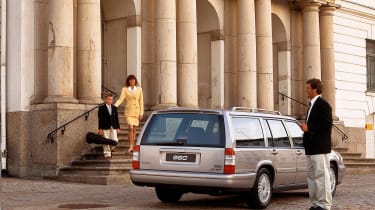 The final rear-wheel-drive estate car produced by Volvo, the 960 was a development of the 700 series. Unable to entirely shift the boxy styling its estates had become famous for, Volvo nonetheless smoothed the 960 out somewhat to make what it describes as ‘one of the most elegant estate cars in Volvo’s history.’

A six-cylinder engine and the rear-facing seating that delighted many a young child combine to make this one family bus that can rival nearly anything built today. 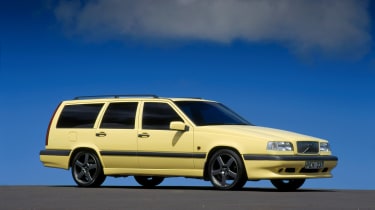 With an intense yellow paint job, enormous boot (and most importantly, a 0-62mph time of just 6.9 seconds) the 850 T5-R was an estate car like nobody had seen before. The 850 T5-R was developed in part with Porsche, and based on the already-pretty-quick 850 Turbo. An 18bhp power boost over that car gave the T5-R stonking performance – enough to put up a pretty good show in Touring Car racing later that year.

It wasn’t all about speed, though – the T5-R continued Volvo’s commitment to safety, and was the first car fitted with four airbags as standard. It also had an early version of daytime running lights. How’s that for forward thinking?

What's your favourite Volvo estate? Let us know in the comments below...