We take outrageous new motorsport-inspired hatch for a wild ride 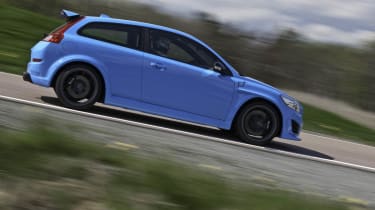 The PCP shows what Polestar could do to a C30 given the chance, and it reckons there would be demand for 200 cars a year. It also says reaction from Volvo top brass has been extremely positive. But don’t expect to see a 405bhp C30 in showrooms anytime soon. It’s not even under consideration and is likely to remain a hugely enjoyable one-off.

Feast your eyes on a Volvo that’s like no other in the company’s 80-year history. Shunning its reputation for conservative styling, this outrageous C30 boasts an all-wheel drive chassis, an eye-watering 405bhp and a 0-62mph time of just 4.6 seconds. Development engineers claim that in a 1,000m time trial round a race circuit, it was six seconds – yes, six seconds – faster than a Mitsubishi Evo X. If this is the future for the Swedish firm under Chinese ownership, we can’t wait!

The car is officially badged the Volvo C30 Performance Concept Prototype (PCP) and is the brainchild of Gothenburg-based firm Polestar. It’s the outfit behind Volvo's Swedish Touring Car Championship team for the last 15 years and reigning title holder. Effectively a road-going version of the C30 race car, it debuted at April’s Gothenburg Motor Show. The four-seater represents six months of work at a cost of £110,000.

Built round a 4WD transmission developed from the V50 variant that’s sold in Europe, power comes from Volvo’s 2.5-litre five-cylinder turbo petrol engine. It’s the unit that also drives the Ford Focus ST and RS. Developing 510Nm, modifications including a larger intercooler, plus upgraded pistons and con-rods. Öhlins shock absorbers and springs have beefed up the suspension and massive Brembo brakes provide the stopping power. The exterior has been styled for former Volvo designer Joel Alexandersson – he penned the XC70 – and started out looking even wilder than it does now. Insiders say his plans for a larger rear wing and front splitter had to be toned down so people could see it was based on a C30. His second attempt is still pretty aggressive. The PCP’s all-round bodykit includes aerodynamic ridges over the front wheels and a two-tone double-decker spoiler at the top of the hatchback. It rides on smoked 19-inch Y-spoke alloys, and is finished in unique Polestar Blue paint with the firm’s P+ logo on the wings. Inside, it’s alcantara everything, including the Recaro bucket seats, steering wheel, dashboard and centre console. The standard dials have been swapped for blue ones, while the boot floor and rear seat backs feature cut-out aluminium sections for luggage straps. The car is street-legal and when it starts – disappointingly, with a regular Volvo key – there’s a wonderfully throaty growl. It’s surprisingly drivable at low speed, but when you squeeze the throttle the PCP just heads for horizon. It’s blisteringly quick and grip levels through the corners are amazing, with the chassis staying extremely flat. Front-end braking is so aggressive you can feel the back end go light. This is a world away from the fuel economy of DRIVe and the refinement of R-Design; the straight-through exhaust means cabin noise is high, and at a frequency which creates a resonance in your ear that’s genuinely unpleasant. The only other sound is the engine backfiring every so often. Volvos don’t usually do that.