Polestar has taken the S60 and turned it into a 500bhp super saloon, but can a Volvo really be sporty? 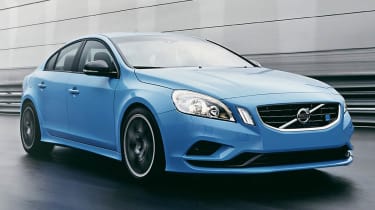 The S60 Polestar is something special. It can’t quite entertain like an M3, it hasn’t got the inherent quality of an RS4 and nor is it as extrovert as the C63 AMG. However, it’s beautifully developed, wickedly fast and has a character all of its own. We fear it may remain a concept but should it make production we’d be very happy indeed.

There’s something special about cars that can combine supercar-chasing performance with a conventional, usable and practical shape. Models like the Mercedes C63 AMG and the new Audi RS4 are great all-rounders, and now there’s a new player from the most sensible of manufacturers – Volvo. This S60 Polestar Concept has 500bhp, leaps from 0-62mph in 3.9-seconds and will nudge 190mph flat-out.

Polestar is Volvo’s official race and performance partner. Last year they raced a C30 in the World Touring Cars Championship and if you own a Volvo and pop down to your local dealership, they’ll be able to reprogramme your engine’s ECU to liberate a little more power with one of Polestar’s fully approved chip upgrades.

However, they’re an ambitious bunch and this concept hints at what they’d really like to be producing in the near future. You could buy a car just like this for – wait for it - £190,000, but that crazy figure is because it would be hand built at Polestar’s Gothenburg factory. If sufficient interest is shown a limited production run at a much more sensible price is a possibility.

So what would you get? Well, this is a comprehensive job. It uses as its basis an S60 T6 AWD, clothed in unique bodywork that bulges over a much-widened track. The 3.0-litre six-cylinder turbocharged engine is also extensively modified with a new induction system, beefed-up internals and a bigger turbo. The result is 500bhp at 6500rpm and 575Nm of torque at 5500rpm. By way of comparison the new RS4 has 444bhp and is heavier, too. Polestar also ditches the standard automatic gearbox and fits a good old-fashioned six-speed manual, which drives all four wheels. Adjustable 30mm lower suspension is also fitted.

It needs that four-wheel drive because this subtle-looking Volvo (imagine it in black) has huge performance. Even better, the delivery is progressive and sustained, tuned to be predictable on the road rather than just effective on track – always a danger when race teams start developing road cars.

Fortunately the chassis and the huge new 19-inch tyres cope easily with the power. It feels so much more stable than the standard S60 and there’s terrific steering and brake feel so you can drive the car quickly with total confidence. Ultimately it prefers to gently understeer than slide wildly sideways in an AMG-style but it’s also adjustable, agile and very effective.

Of course it should feel pretty spectacular at £190,000. The big question is whether Volvo can rein back Polestar’s concept enough to make a viable RS4 or C63 rival whilst protecting this car’s unique character and most of its storming performance. If they do the S60 Polestar won’t light-up the sales charts, but it might reflect some glory down onto the rest of the more sensible range.