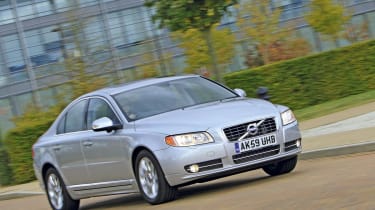 When driving a supermini that’s tuned for maximum economy, the compromises tend to be obvious, with tall gearing blunting performance and less kit than usual. In contrast, the S80 DRIVe feels like an ordinary version of the saloon but with a smaller engine. As a result, you do not feel you’re missing out on refinement or comfort in the name of being green. Low emissions make the S80 DRIVe an appealing company car choice, but even private buyers will appreciate its economy.

The gaps are being plugged in Volvo’s DRIVe line-up. The Swedish firm’s eco sub-brand already has one of the most comprehensive ranges around – and now the flagship S80 saloon has joined the family.

Its launch coincides with that of the green V70 estate, leaving the XC90 SUV as the only Volvo not available in DRIVe guise.

So, exactly what sets the new S80 apart? The answer lies under the bonnet, where power comes from a fuel-sipping 1.6-litre diesel engine. No, that’s not a misprint – Volvo’s BMW 5-Series competitor really does boast the kind of motor that other manufacturers use in their superminis.

The benefits are clear, with claimed economy of 57.7mpg and CO2 emissions of only 129g/km. Other measures designed to improve the car’s eco credentials include electric power-steering – instead of a bhp-sapping hydraulic set-up – plus low-rolling-resistance tyres and taller gearing.

The S80 also rides on lower sports suspension settings to improve aerodynamics. But is there a price to pay for the model’s eco-friendliness from behind the wheel?

Well, the big saloon is clearly no dragster, but Volvo claims a 0-62mph sprint time of 12.4 seconds, which feels entirely realistic. With 240Nm of torque from 1,750rpm, the S80 keeps pace with traffic easily, and has no problems with overtaking.

But getting the most performance will be the last thing on your mind.

A decent ride and tall gearing make for refined high-speed cruising, while the car also has some of the most comfortable seats around. As a result, you are more likely to be watching the trip computer than the speedo, as you try to squeeze out a few more miles per gallon.

It’s no surprise to learn the S80 isn’t the most rewarding car to drive – the controls are light and there isn’t enough grip or agility to get the pulse racing. But that isn’t the point.

Instead, the DRIVe’s relaxed character is perfectly suited to achieving strong fuel returns. Driven sensibly, it’s possible to record some impressive figures, with a range of at least 800 miles between fill-ups. Add a list price of £22,245 – not bad for a car which provides such space and comfort – and it is as affordable to buy as it should be to run.