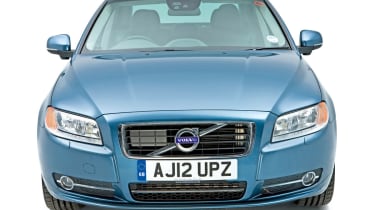 The Volvo S80 has long offered better value than its rivals, especially as a used buy. While the second generation may look very much like the first, this revised model represents a big improvement, even if it’s still no class leader. And with a wide array of engines you can choose between strong performance and impressive economy – although second-hand petrol models are scarce. The S80 may not be as good to drive as some of its rivals, but many buyers can look beyond this when they’re getting such amazing value for money.

The largest used cars sometimes offer the biggest bargains. Take the Volvo S80. The stylish and discreet flagship saloon sheds value at an eye-watering rate thanks to its low profile and the fact that it’s overshadowed by newer rivals, such as the Audi A6, BMW 5 Series or Mercedes E-Class.

But the S80 is still a good car – it’s comfortable and, as you’d expect, impressively safe, with an ultra-strong bodyshell and loads of hi-tech equipment. So if you’re after a bargain long-distance cruiser, look no further than this stylish Volvo saloon.

The S80 is up against some very talented competition. The Audi A6, BMW 5 Series and Mercedes E-Class all offer saloon or estate bodystyles, a strong image and superb build quality with an excellent dealer network. The Audi comes with 4WD, the BMW has great driving dynamics and the E-Class is more spacious.

Another strong contender is the Jaguar XF, as it’s stylish, reliable and refined on the road – although the recently launched Sportbrake estate is still very costly. A different alternative is the saloon-only Lexus GS 450h hybrid, which is well equipped, reliable and a very rare sight.