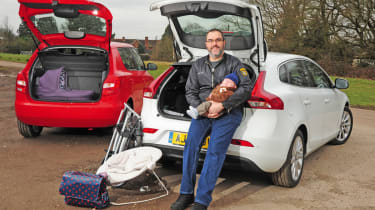 It’s amazing how your priorities change when you have a baby. Up until three months ago, our Volvo V40 was perfect for my needs. But with the arrival of my son Rhys, the car’s practical shortcomings have been brought sharply into focus.

You see, the boot simply isn’t up to scratch. In fact, I’ve had so much trouble fitting all Rhys’ gear in the back that I’ve started to use my wife’s Skoda Fabia when we need to take all his stuff with us.

Look at the numbers, and it’s clear that something is amiss. The Volvo has a 335-litre boot, while the Skoda has 300 litres exactly. That’s not much of a difference when you consider that the V40 is a full 36cm longer and 16cm wider than the supermini.

Worse still, the shape of the V40’s boot limits its practicality. The shallow floor means I can’t stack very much on top of Rhys’ buggy, whereas in the Skoda, everything fits in below the parcel shelf. Our Volvo is fitted with the £100 optional Flex Floor system, which adds a hinged boot floor with a hidden compartment underneath, but this is only a couple of inches deep and not that useful.

Space in the back for Rhys’ car seat is at a premium, too, although that’s more down to the Graco seat we use, as it has very bulky padding. At least the interior is quiet, so Rhys can get some sleep, while the ambient lights – which can change colour, either manually or in sync with the climate control – mean he’s not in total darkness when we’re on the move.

Unfortunately, the V40 has been suffering from several small niggles that have spoiled my time with the car. A week spent back at Volvo with the engineers seems to have cured the intermittent airbag warning light that was flashing up on the dash, but I’m still having trouble with the satellite navigation freezing on its loading screen.

Other people have picked up on this, too. Generally, the first time you turn on the ignition, the navigation boots up fine, but if you turn the car off and back on again – when you’ve stopped at a petrol station, for example – then the loading screen will remain on. It’s a hugely frustrating issue.

Another minor problem was a piece of trim coming loose – trim that seals the gap between the driver’s and rear passenger doors – which resulted in more road noise from the right-hand side of the car. Fortunately, this issue was quickly fixed by pushing the rubber sealing strip back on to the leading edge of the passenger door.

These niggles aside, I’m still enjoying my time with the Volvo. I love how it looks, and as I see more V40s on the road, I think our car’s white paint looks smart, too. The cabin is well finished throughout and the optional electric memory driver’s seat makes it easy to get back to a comfortable driving position quickly after someone has borrowed the car.

A few longer runs have given the Volvo a chance to stretch its legs, and as long as the 1.6-litre diesel engine is kept at around the 2,000rpm mark, it’s responsive enough for overtaking. The handling isn’t the sharpest, but it can still entertain you on a twisty road.

Add average fuel economy of 51.5mpg, plus exemption from the London Congestion Charge, and the Volvo V40 is still a great car to live with. Next time I go out, maybe I should leave Rhys and his gear at home...

“A bigger boot wouldn’t go amiss in the V40, but the stylish hatch is still one of the most refined and comfortable choices in the small family car class.”James Disdale, Road test editor

“Current Volvos look refreshing. If you prefer a boring Golf, then go ahead, but I’d happily drive a nice car that no-one knows much about.”blackcolour, via www.autoexpress.co.uk