It's a big surprise to discover that Volvo only made its first diesel engine in 2001. 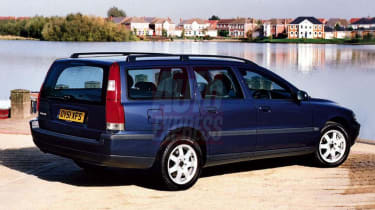 The V70 finally gets the engine and gearbox combination we've been waiting for. Smooth, powerful and economical, the D5 unit is a star. However, while the five-speed auto is welcome in the diesel line-up, it can struggle at low revs and has a disappointing effect on the CO2 emissions.

For a firm that has a reputation for building unbreakable workhorses, it's a big surprise to discover that Volvo only made its first diesel engine in 2001. After years of buying in oil-burning units and fitting them to cars that often deserved better, the Swedish giant hit the jackpot with the clean and efficient 163bhp D5.

To complete the picture, Volvo has introduced a new five-speed automatic gearbox across its S60, V70 and S80 ranges. Costing £1,100 extra on all V70 D5 models, it brings the price of the entry-level version up to £25,055.

Previously on the firm's petrol cars, the self-shifter has been fine-tuned to complement the torquey nature of the D5 unit, and Volvo has done a decent job. The five-cylinder is one of the best around, and the new transmission does nothing to alter this. With a wonderfully throaty warble, it's one of the most rewarding diesels to work hard.

However, there are times when the engine and gearbox seem at odds with each other. Although the two appear to gel better at speeds over 30mph, at low revs the shift can seem reluctant.

That said, consumption of fuel is miserly - we averaged 33.9mpg and you won't find a more comfortable motorway cruiser. But the auto has a detrimental effect on the engine's CO2 emissions. At 215g/km, the D5 auto is 38g/km dirtier than its manual equivalent - a difference that would cost even a standard rate taxpayer an extra £265 a year under the new company car rules. Ultimately, the V70 D5 is a decent package, but while the engine is Volvo's finest, the auto box isn't quite the labour-saver it might at first appear.