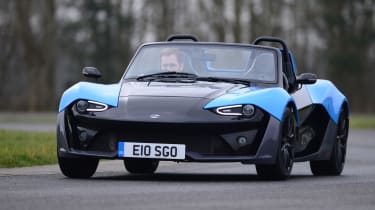 If anything, the Zenos E10S has exceeded expectations. How a sportscar company launched less than two years ago can create a genuine alternative to a Lotus or Caterham is anyone’s guess. The Zenos’ grin-inducing nature is obvious when you first clasp eyes on it, with its raw design simplicity mirroring its uncompromising character on the road. It was intended to be good, clean, affordable fun and that’s exactly what it is.

Generally speaking, you have two options if you’re after a lightweight, two-seat sports car; Lotus or Caterham. They share decades of experience in developing undiluted, back-to-basics machines that major on fun but now there’s a new alternative with an impressive pedigree of its own – the Zenos E10S.

Zenos is the brainchild of former Lotus and Caterham bosses, and the E10S is the company’s second production model. It continues in the vein established by the E10, of delivering lightweight, affordable sports car thrills and it has the Lotus Elise S firmly in its sights. 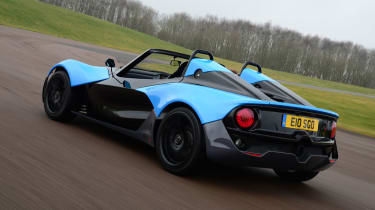 The E10S sits on the same bespoke part-carbon, part-aluminium chassis as its lesser-powered E10 stablemate but it has the 250bhp 2.0-litre turbo Ford Focus ST engine nestling inches behind your head.

Its appearance is minimalist in the extreme – there’s no roof, no doors and the windscreen is a £1,600 option. This helps it tip the scales at only 725kg. For reference, the hardly lardy Elise S is almost 200kg heavier and has 33bhp less shove.

That makes the E10S quick, seriously quick. Clamber over the low-slung body, sink into the sparse cockpit and you feel perfectly cocooned despite the absence of a roof. The seat slides and the pedal box is also adjustable meaning there’s the perfect driving position for everyone in there somewhere. 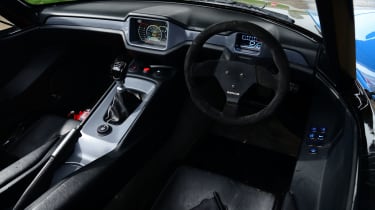 Bury the throttle and the semi-slick ZZR tyres bite into the tarmac. If the rubber was any slicker it could go on Lewis Hamilton’s F1 car and it helps catapult you from 0-62mph in less than 4.0 seconds. All the time the digital speedo struggles to keep up as you rip through the next five ratios on the Ford-derived gearbox. The lever is a little tall and the throw perhaps an inch too long but it has a solid action.

The engine whips all the way to 7,000rpm and despite being turbocharged there are no surprises in its power delivery – it’s predictable and positively linear. Lift off the throttle and you’re treated to heady whistles from turbo and bangs from the exhaust. 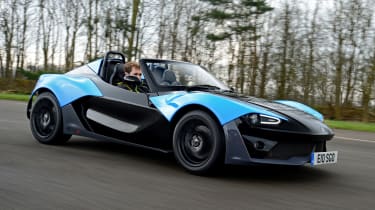 It’s a completely all-consuming experience and the lack of distractions in the cabin – two digital read outs and a gear stick is your lot – means you can just get on with what the car was designed to do – drive.

The Zenos E10S steering wheel is small and cooperates with your every movement, the completely unassisted and perfectly balanced set-up allowing you to dance the car through corners. 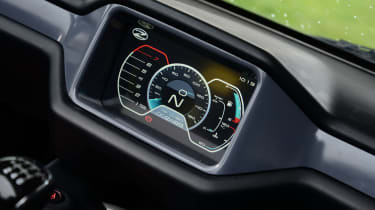 Grip from the front-end is strong and there’s a real sense of precision and depth of engineering, but in the wet and on barely-legal road tyres it can become a little sketchy. Without the safety net of ABS or traction control, it’s definitely worth investing in a set of all-weather tyres for road use.

The ride strikes a great balance, being forgiving enough on the road but stiff enough so you can really lean on the car without upsetting its inherent balance. However, if the wind-in your-hair experience is the only thing putting you off, Zenos is also working on a two-door E11 roadster due in 2016. That will have a clip-on roof.