Well deserved win for Nokian, with a balanced performance across wet and dry tests 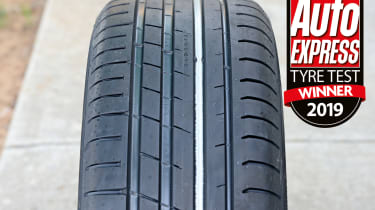 We've long been fans of Nokian’s winter and all-season tyres, and their success is no surprise given the Finnish maker’s state-of-the-art snow-testing facilities. But its summer range (or just ‘tyres’ for most UK drivers) has failed to match that performance – until now.

The Powerproof, and the Wetproof for the touring tyre segment, were launched last year to target premium producers like Michelin and Continental. And the firm is determined to succeed in the summer as well as the winter sector, with a proving ground and tech centre in Spain due to open next year. But its existing facilities are good enough to make a top SUV tyre.

It took all three wet handling and braking tests, and was one of those tyres that seem to encourage you to go faster.

It was sharp, with a positive turn-in that encouraged higher entry speeds and an earlier throttle application. It did less well in the aquaplaning assessments, but was close to the pace in the longitudinal test.

It combined that wet-track performance with decent fuel economy, taking third behind the Continental and Michelin, which were nowhere near the Nokian in the wet. That sharpness was absent in the dry, but it gripped well and delivered a lap time good enough for third, less than half a second off the winning pace. The only poor test was cabin noise.

"We don’t stock this tyre, so are unable to provide any insight into its popularity or performance with our customers. This win should see demand rise"