New designs dominated our top six this year, but the exception is this Michelin, which is the best of the 17-inch tyres we last tested in 2011. 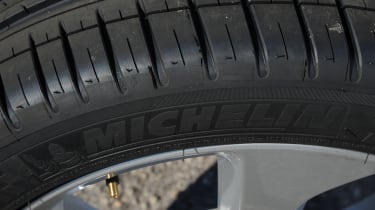 New designs dominated our top six this year, but the exception is this Michelin, which is the best of the 17-inch tyres we last tested in 2011.

Suggest to the company that it’s changed its design philosophy, and now produces tyres that perform well in the wet rather than focusing on fuel economy, and you’re likely to get a Gallic shrug. Yet the Pilot Sport 3 was the top performer across the wet road tests, while trailing the best in rolling resistance by over 20 per cent.

Whatever’s going on at Michelin, this is a cracking tyre. It starred in the deep floods of the aquaplaning tests, where it was well ahead of the rest, whether in a straight line or on a curve. The tyre carried over this strong performance to the wet handling and braking disciplines, with fourth and third places respectively.

We had to work it a little harder than some to achieve fast lap times because care was needed to keep the front on line. Get the front to bite, and the rear would move a little, but it was all safe and easily controlled. We found we could get on the power, too, helping this tyre to a good result in wet cornering.

The Pilot Sport 3 was less at home on the dry track, where it lacked the sharpness of the best performers in this category, although it held on well enough, and ended up giving away only a second or so to the winner. In the end, Michelin’s dry braking and rolling resistance scores proved decisive, but overall this is a great performance in the face of much newer designs.