High-mileage drivers would do well to consider the Sport Maxx RT. 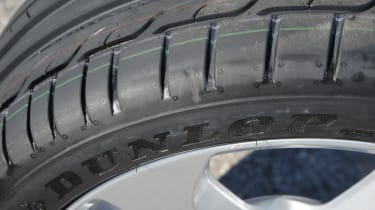 High-mileage drivers would do well to consider the Sport Maxx RT. It romped away with the honours in the rolling resistance test, establishing a clear margin between itself and its stablemate from Goodyear, with a further 20 to 25 per cent advantage over its other rivals.

The Dunlop was also one of the quietest tyres – another major plus for those regularly covering long distances. Add in a second place for dry braking, and you have the most successful tyre away from the wet tests, even though it was eighth in our dry handling test.

As this product is from the sporting brand in the Goodyear/Dunlop fold, we’d hoped for more on the track. But it couldn’t match the sharpness of tyres such as the Yokohama, and was also noisy and required lots of lock compared to the top performers.

This wasn’t the Sport Maxx RT’s biggest problem, however – that was its performance in the wet. Although it finished a reasonable third and fourth in the aquaplaning tests, and wasn’t far off most of its rivals in the process, it came last in the cornering test because the front lacked bite and easily washed out wide on the throttle.

This was also noticeable around the rest of the lap, where we had to wait to get on the power to maintain the line. However, it did mean that the rear was stable, and there were few surprises in corners. The Dunlop also lacked grip in the wet braking test, needing an average of six metres more to stop than the winner, the ContiSportContact 5.