Our winner of this tyre test in 2011 has to settle for joint fourth this time around, giving best to the new tyres from Continental and Dunlop and tying with test newcomer Hankook. 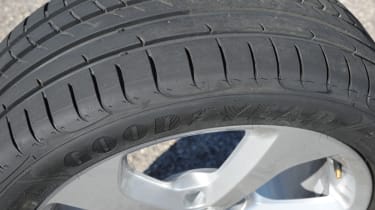 Our winner of this tyre test in 2011 has to settle for joint fourth this time around, giving best to the new tyres from Continental and Dunlop and tying with test newcomer Hankook. But it was close, with the top five separated by just 1.5 per cent and all a step ahead of the rest. The Goodyear Eagle F1 is one of the most efficient choices.

It finished a close second to its stablemate from Dunlop in our rolling resistance tests, with the two tyres having a clear margin over rivals.

However, that was the only time the Goodyear troubled the podium. Dry handling was the one significant blot on an otherwise solid midfield performance across the remaining tests. It just didn’t hook up like other designs, pushing wide on turns, and with some juddering at the limit.

The tyre lacked the sharpness on turn-in of rivals like the Vredestein and Yokohama, too. It fared better on the wet handling track, narrowly missing out on a podium place, as it was less prone to run wide than some of its rivals and had decent grip under hard acceleration. There was some rear movement in the faster sweeps, but it was all controllable and progressive.

It was a similar story in wet braking, where it was in the thick of the action behind the runaway leader. Equal fourth and sixth in the aquaplaning assessments meant it was fifth overall among the wet tests, which account for half the final results. But good scores in cabin noise and fuel economy were never going to be enough to overcome that wet track disadvantage.