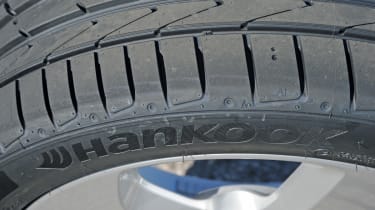 Korean tyres are fast gaining credibility against premium brands: Nexen finished third in last year’s tyre test, and Hankook flies the flag again with a fine showing to come joint fourth in 2013. We can see clear progress from the company: in 2011, when we last tested 17-inch tyres, the S1’s predecessor ended up last.

But this year, the S1 demonstrated Hankook’s leap forward, particularly on wet roads, where it scored a string of podiums. Only its wet cornering let the side down. And the tyre lacked balance on the soaked handling circuit, with the rear moving around thanks to strong front grip. Yet that front grip was beneficial for lap times, allowing acceleration good enough for third in the wet handling test.

As with the Goodyear, the S1 found it hard to match rivals on the fast sweeps of the dry handling circuit. It turned in well enough, but gave up early as cornering forces built, and required more lock to get round longer turns. Where it really lost out to the joint-fourth Goodyear was at the pumps.

There was a 20 per cent margin between the two – so the S1 would use around four per cent more fuel than the Asymmetric 2 and six per cent more than the Dunlop. Still, the Hankook did hit back by edging its rival in the noise test.