The V105 is new for 2013, and you can clearly see Yokohama’s track roots in the tyre, which replaced the popular V103 at the top of the brand’s road range. 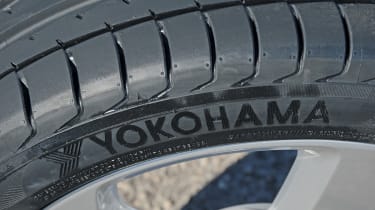 The V105 is new for 2013, and you can clearly see Yokohama’s track roots in the tyre, which replaced the popular V103 at the top of the brand’s road range.

This was our handling circuit star, finishing first in the wet and second in the dry – a result that’s all the more remarkable when you consider that success in one usually compromises performances in the other. On the wet track, the excellent front grip meant the rear moved more than most.

This was great for fast lap times, as it helped get the car turned in, but you needed to stay on top of it. That strong front-end grip also meant you could get back on the throttle hard and early during the long cornering test without fear of the nose washing wide. It hung on well on the dry circuit, too. The tyre felt sharp going into corners, but needed a little more steering lock than some close to the limit.

Where the V105 was off the pace was in the aquaplaning tests, as its asymmetric tread couldn’t clear the deeper water as well as the best. This was particularly noticeable in the lateral test, where it finished seventh. In braking, the V105 finished a fair way down the table, but apart from the Continental it was close to most rivals. It was also one of the noisier tyres, some way behind the winning Hankook.

You’ll pay for that track performance at the fuel station, too: 10th place is not what you’d expect in rolling resistance from a new design, and a cause for concern for Yokohama’s engineers.