Yet again, Bridgestone found it tough in our tyre test, finishing last among its premium rivals. 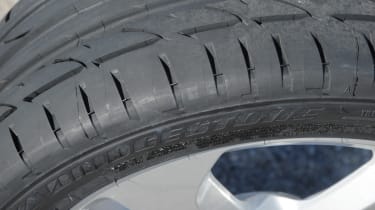 Yet again, Bridgestone found it tough in our tyre test, finishing last among its premium rivals. The Potenza S001 came 10th for cabin noise, but this test was closely matched; it was in thewet where it was really off the pace.

Ninth place for wet handling is simply not what you expect from one of the world’s biggest tyre makers, although Bridgestone is developing new products following a series of disappointing results in magazine tests.

The margins were small in wet handling, but it didn’t feel as secure from behind the wheel as the best. The rear was more likely to move, with grip leaking away as more lock was applied. That’s not too worrying, as the breakaway is progressive and easily controlled, but it makes it hard to put together a quick lap.

The Bridgestone was also well down the results in wet braking, where it was sixth – some way behind the standard-setting Continental. Yet it was much more at home in the deep water aquaplaning tests.

The big grooves and channels that are needed to counter aquaplaning can often compromise the performance of a tyre on dry roads, but it managed an impressive fourth on the handling circuit. It had plenty of lateral grip and sharp-feeling steering, with little scrubbing as the loads built up. A third position in dry braking completed a good performance in the dry. But combine a poor result in fuel economy with those on the wet track, and the S001 is restricted to seventh place overall this time.