The new ContiSportContact 5 scored a victory on its tyre test debut, albeit by a very narrow margin. Key to this success were our braking tests. 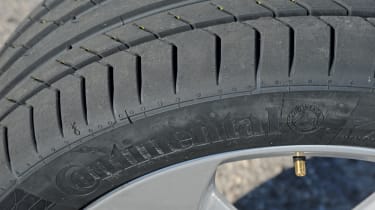 The new ContiSportContact 5 scored a victory on its tyre test debut, albeit by a very narrow margin. Key to this success were our braking tests.

The engineers at Continental have really found something when it comes to stopping, both in the wet and dry. In wet conditions, the tyre’s braking performance was much better than any of its competitors’. In fact, its closest rival needed an average of three metres more to bring the car to a halt, while the worst wet braking performer required over eight metres more.

This is easily the difference between having a crash and not. The Conti was also the most consistent performer here – every stop we measured was within not much more than 50cm of the previous one.

And in the dry braking test, it ran out a convincing winner again. It’s not all about braking, though: the ContiSportContact 5 was at ease in the aquaplaning tests, too, with second and third, and was best of the rest behind the Goodyear and Dunlop in rolling resistance.

Even where this tyre didn’t perform so well, it didn’t trail by enough to affect its overall ranking – so while it only came sixth on the wet handling track, it was within three per cent of the best. Similarly, it was sixth on the high-speed circuit, but under four per cent behind the winner.

The wet track suited it better, as it had good balance and traction here. On the dry handling circuit, it lacked the sporty feel of the best, and triggered the stability control electronics earlier. Yet it still felt safe and secure – and this fine all-round showing seals another win for Continental.