The Performance+ is part of a refresh of Goodyear’s winter tyre offering for cars, with the UltraGrip 9+ joining it ready for this winter. 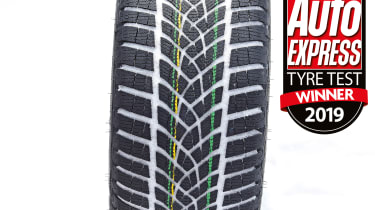 The Performance+ is part of a refresh of Goodyear’s winter tyre offering for cars, with the UltraGrip 9+ joining it ready for this winter. Performance+ is aimed at the high-performance market and has ‘Winter Grip Technology’, which is a new compound with better elasticity at low temperatures.

For once the marketing spiel is spot on, because the Performance+ dominates our snow tests with an almost two per cent advantage over the next best, stablemate Dunlop. It takes braking, traction and circle honours, and loses a clean sweep by the narrowest of margins on the handling circuit. Around the sweeps and elevation changes of the circuit it feels very similar to the previous standard-setter from Continental, with strong front grip and a rear that follows rather than slides through turns. Traction on lock is also impressive, in an area where many rivals struggle.

It also wins in the key wet handling and braking assessments. That solid rear is present again on the wet circuit, where it triggers the stability control less frequently than many rivals, despite the impressive front grip. You can also get on the power early without the front washing wide as it did with other brands. The tyre’s weakest surface is the dry, where it scores two seventh places but, as usual, the margins are fairly close. Pushed hard on the circuit it needs plenty of lock, and performance drops off quickly.

This is the best option if you prioritise quiet running, because it wins the cabin noise test. It also provides a good balance between wet grip and fuel economy – not always a compromise that is easy to judge – finishing among the brands leading the chase behind the winning Nokian.

We say: A new benchmark that rival winter tyres now need to beat

Blackcircles.Com says: Because this is a new tyre to the market, feedback from customers on the Performance+ is yet to come in. But the impressive test results are likely to pique the interest of motorists in the coming months.