Is 170bhp hot hatch worthy of the legendary badge? 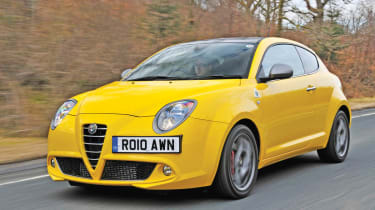 The new Cloverleaf doesn’t quite live up to the legendary badge. But the most powerful MiTo’s smooth and punchy MultiAir turbo engine serves up useful performance, and the noise it makes will be enough to convince many buyers. Add in a decent ride, and the newcomer begins to look like a contender in the hot hatch market. However, questionable steering feedback and a dated interior ensure it just falls short of the class leaders.

Alfa Romeo is hoping to race to success with its latest model – the MiTo Cloverleaf. The legendary badge first appeared on the brand’s competition cars in 1923, when a four-leaf clover was presented to a driver at the start of the Targa Florio race as a good luck token.

Initially, the name was reserved for Alfa track cars, before being used on high-spec and high-powered versions of modern production models.

The MiTo Cloverleaf upholds this tradition, as the brilliant 1.4-litre MultiAir turbo engine delivers 170bhp – to make it easily the most powerful variant of the supermini. Peak torque of 250Nm doesn’t arrive until 2,500rpm, but the engine loves to be revved, with the linear power delivery fooling you into thinking it’s naturally aspirated.

It’s mated to a slick-shifting six-speed manual gearbox, while the exhaust emits a pleasing growl that inspires you to press on. Do so and the Cloverleaf will cover 0-62mph in 7.5 seconds.

Around town, a smooth stop-start system boosts combined fuel economy to 47mpg-plus – a terrific figure for such a quick hatch. On back roads, though, the Alfa isn’t the most involving car. Select Dynamic mode from the DNA adaptive damper system, and the suspension and steering weight up. The wheel could provide more feedback, and body control isn’t as sharp as in some rivals, either. And while the Q2 electronic differential works hard to tighten the nose’s line, the car still doesn’t provide the agility of a MINI or even the new Citroen DS3.

Outside, the Cloverleaf is set apart by alloys and stick-on badges – the latter look cheap and too big for the wings they are glued to. As with all MiTos, the styling is at its best from the rear or along the flanks, showing off the aggressive flared wheelarches. The front end still divides opinion: some will love the way the face takes cues from Alfa’s 8C Competizione; others won’t.

Inside, the headlining, plastics, carpets and seats are all black, making the cabin feel quite claustrophobic. Occupants over six foot tall will find their head skims the roof, while it’s even more cramped in the rear.

The driving position is good, though, and the standard equipment tally generous. Initially, the interior design looks exciting, with its cowled dials and metal-finished centre console. However, the large steering wheel, poor quality plastics, exposed screws and dated switchgear let it down.

So, is the new MiTo Cloverleaf worthy of its famous name? Well, it’s no hardcore hatch in the mould of those illustrious racers of the past  – but it still sounds great, and is a fast and agile choice.

Rival: Citroen DS3 DSport While the French contendertrails in terms of power, it has better gearing than the MiTo, plus it’s lighter – so it’s a stronger performer. The Citroen doesn’t sound as good as the  MiTo, but offers a great interior and costs around £2,000 less.